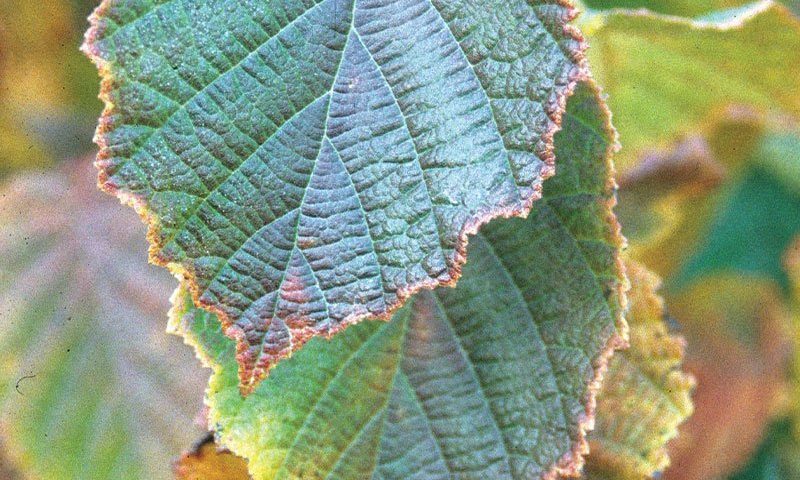 American Filbert, also known as American Hazelnut, is a suckering shrub native to the edges and understory of Wisconsin woodlands. It will grow in a wide variety of conditions, attracts many species of wildlife, and has four-season interest. American hazelnut is an excellent choice for woodland gardens and naturalized areas.

American filbert makes for an interesting hedge, a great border plant, or a green screen in areas where it can spread. It’s the perfect addition to natural areas to add visual interest and provide habitat and nourishment for wildlife. Corylus americana is the earliest native plant to bloom in southeastern Wisconsin. You will find male and female flowers on the same plant. The male flower is a large (2-3” long) pendulous showy catkin, yellowish brown in color. The fall color is variable, typically orange, reds, purples.

This unique native shrub offers visual interest in all seasons and tolerates a wide variety of conditions. The pendulous male catkins develop in fall and provide winter interest. In early Spring, the catkins bloom turning bright yellow. Next emerges the ovate dark green foliage which has ridges and doubly serrate margins. Meanwhile, large clumps of 2 to 5, 1/2 inch nuts emerge from the female flowers, covered in hairy jagged-edged husk-like bracts. The nuts mature between September-October. People and animals enjoy the hazelnuts, which have a similar flavor to commercially cultivated European and hybrid hazelnuts.

Nut production is variable, and not as prolific as European hazelnuts. It is recommended to plant multiples to increase chances for higher yields of hazelnuts, if desired. Harvest them while the husks are still green, after nuts have turned tan in color, to out-compete animals.

American filbert prefers full sun to part shade. It will grow in full shade; however, the form will be more open and growth rate more moderate. Nut production is also reduced in shade. According to the Morton Arboretum, American filbert can also be grown in dry shady areas with a layer of organic mulch, as long as it is monitored for water during periods of drought. It is tolerant of variable soil pH if grown in well-drained soil, tolerant of drought, and will grow in dry, moist, clay, or sandy soil conditions.

Hazelnuts have a higher nutritional value than acorns and are a protein source for many types of wildlife, including wild turkey, ruffed grouse, woodpeckers, blue jays, chipmunks, squirrels, and foxes. Thickets provide shelter and nesting areas for wildlife as well. Turkey and ruffed grouse will also eat the male catkins during winter.

American Filbert is a host plant to caterpillars of the Saturniidae family, some of the most spectacular moths in North America. These include the beautiful green Luna moth (Actias luna) and the large, strikingly patterned cecropia moth (Hyalophora cecropia). In our area, typically the caterpillars are not prolific enough to cause significant damage. These unique Lepidoptera begin their lifecycle as tiny larva in the first instar stage and can grow to be quite large in their final stages (a hardy 2-3” in length). The adult moths have a very short lifespan (7-10 days) so are rarely seen.

Hyalophora cecropia on a Corylus americana

Expect no serious pest or disease issues with American filbert. You may experience occasional Filbert blight, but it is not seriously damaging to this native filbert species, unlike Turkish and European filbert. Japanese beetles, scale insects, and some caterpillars feed on American filbert, but are not a serious threat to the plant.

The genus Corylus describes the shape of the seed bract and is derived from the Greek word ‘korylos’ or ‘korys’, which means helmet.

There is also a native filbert called Beaked hazelnut, Corylus cornuta, which is similar to the American filbert. Beaked hazelnut is a smaller shrub, and the seed bracts have “beaks” or “horns”, which is the meaning of the specific epithet cornuta.

The Universities of Wisconsin and Minnesota are collaborating on a development initiative to produce native hazelnuts commercially and sustainably in the upper Midwest. To read more about this interesting project, visit Upper Midwest Hazelnut Development Initiative.