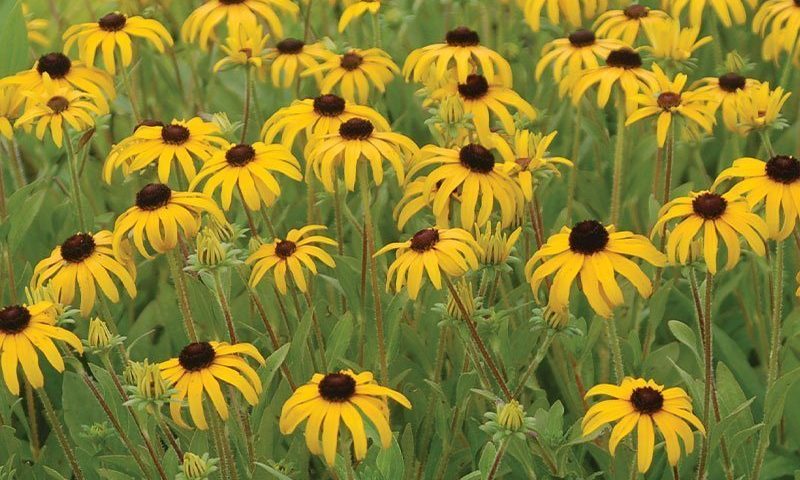 Bright yellow flowering and foliar disease resistant this hybrid nativar thrives in full sun and average soil conditions. Tolerant of both hot and humid summer months, American Gold Rush Rudbeckia is naturally compact fitting well into a variety of garden settings. This cultivar has proved excellent fungus resistance, which is important when selecting a Black-Eyed Susan to add to the landscape. Attracting birds and bees are one of many beneficial aspects of this herbaceous perennial. This variety of Rudbeckia has smaller foliage and is shorter height than most varieties and also holds some color up until frost.

American Gold Rush Rudbeckia sites best in full sun, and average to dry conditions. In a sun perennial garden, borders, foundation beds or as an accent plant. It is very tolerant of drought, prefers mesic (average moisture) to dry soil conditions, and with its compact size making American Gold Rush Rudbeckia a great choice for urban environments as well. Low maintenance and disease resistant, it’s versatile and alluring. An upgrade to your traditional Black-eyed Susan, some would say. Used as a mass planting, it may just feel like the American Gold Rush is happening in your own backyard.

Pollinators love Rudbeckias, and this one won’t be left behind. American Gold Rush attracts birds and butterflies. The seed heads of all Rudbeckia cultivars are valuable to birds.

Site in dry to normal soil conditions, and do not overwater. American Gold Rush Rudbeckia is drought tolerant as stated previously and highly disease resistant making it relatively low maintenance. Deadheading can be done to encourage more blooms after the first flowers of the season are spent. At the end of the season, you could choose to deadhead spent blooms, but you’re taking food away from birds.

As always, we recommend mulching around your new planting but avoid the crown or foliage. Plant in a mass for a great pop of color for most of the season.

Extremely disease resistant, even in wet, humid conditions American Gold Rush Rudbeckia was bred to have minimal pest issues. Its resistance to Septoria Leaf Spot surpasses many other varieties.

American Gold Rush is a selection of Rudbeckia fulgida var. deamii. Deam’s Black Eyed Susan has narrower foliage that is more pubescent (hairy) than the more common Rudbeckias like Goldsturm. Deam’s Black Eyed Susan received the Royal Horticultural Society’s Award of Garden merit in 1993, cementing this as a dependable plant. This variety (and so, this cultivar) are treated as more disease resistant and drought tolerant than other varieties and cultivars of Black Eyed Susan.

American Gold Rush Rudbeckia is an All America Selections 2020 Herbaceous Perennial Trial winner. Bred by Intrinsic Perennial Gardens. Some comments from judges per AAS site are as follows.

“Would make an excellent addition to a yard, especially in any sort of mass planting.”

Among other great remarks. Read more about American Gold Rush Rudbeckia at All American Selections.

All images provided by All America Selections.