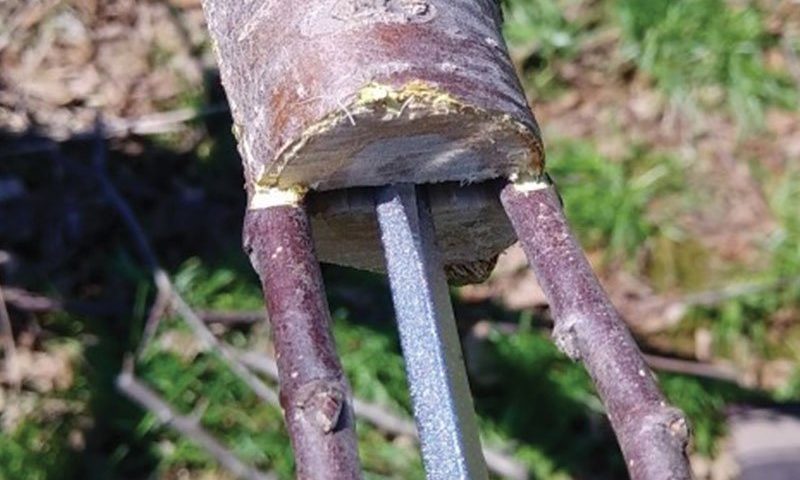 Do you want to grow numerous varieties of apples all on one tree? Wish you could grow apples, but your yard is too small, and you only have room for one tree (growing apples requires 2 different varieties in order to set fruit)? Or do you have an existing apple tree that is a variety you do not desire, and you would prefer growing a different variety? Perhaps you are the rare possessive plant collector who has more apple trees than you really need, yet still desires collecting even more apple varieties? If any of these are true, then cleft grafting apple trees is a great solution.

Grafting is one form of asexual propagation that produces a plant that is genetically identical to the mother plant. Since apple trees do not grow true to variety from seed, they must be reproduced asexually to generate another tree of same genetics. Normally this is done by a form of grafting (chip budding, t-budding, whip and tongue graft, etc…) where one piece of wood from the mother tree is grafted onto a rootstock to create a new tree having the same genetic background. With grafting, we can also put more than one apple variety on the same tree!

This technique allows you to topwork an existing apple tree over to an entirely different variety or just add other varieties to the same tree. Other grafting methods will work better if your existing trunk/branch is smaller or larger than these parameters. Save cleft grafting for branches in the 1”-3” diameter range. 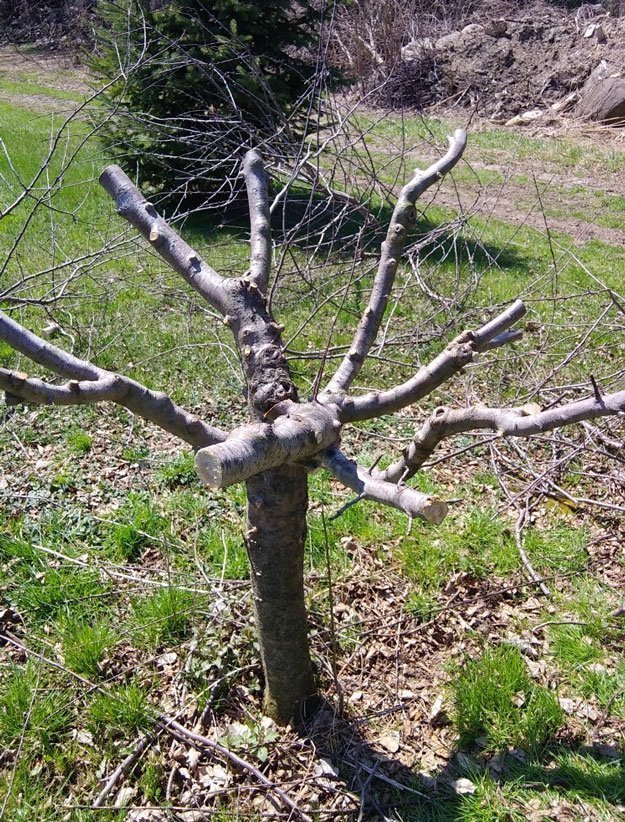 You will need to collect or purchase scionwood of the apple variety you wish to add to your existing apple tree or change your existing tree over to. The scionwood should be from the previous season’s growth, and best when it is the diameter of a pencil in thickness. Collect these scions when the tree is dormant, wrap in plastic wrap to keep moist and refrigerate until you do your grafting. Cleft grafting is best done late in the dormant season just as the buds on the apple tree to be grafted to start swelling.

I had an apple tree that refused to bear fruit. After waiting for 8 years, it rewarded me with one apple. Perhaps if I was more patient, it might have eventually bore me a decent crop. But 8 years is enough waiting, so I pondered whether to cut it down or graft it over to another variety. Then I had the idea to make it into a new tree with multiple apple varieties! A friend supplied me with scionwood of King David, Hooples Antique Gold, and Spartan apple varieties. Having never cleft grafted before I decided to give it a try.

In late April of 2019, I sawed off all the branches on the existing tree leaving a short stub (12”-15”) to cleft graft too. Then, using a sharp but heavy bladed chef’s knife and a mallet, I carefully split each stub across the middle (see left image below). Leaving the tip of the blade still in the wood, I rotated the blade to the right and used the head of a screwdriver to wedge into the center of the crack to keep it open before I entirely removed the knife (see right image below).

Scions of each variety I wanted were cut on the basal end into a v-shape. The scion is then inserted into the crack in the stub and the cambium layer of the scion (green tissue) is matched to the cambium layer of the host tree (this is important!). To assure a better success rate, I also inserted a scion in same fashion on the opposite end of the cut stub thus having 2 grafts per branch. I left the scions long to make them initially easy to work with and then trimmed them back to 2-3 buds in length AFTER they were cleft grafted to the host tree.

The next step was to heat up some grafting wax (paraffin) and cover the entire cut area with wax to keep the moisture in. I also put wax on the top end of the scion where it was cut to length.

After about 14 days, my little grafts started to leaf out. How did I do? I got a 60% success rate. Not bad for my first attempt at cleft grafting. For the first year, I let both grafts per cleft grow. In spring 2020, I will cut the weakest of the 2 scions back to 1 bud to assure that the more vigorous scion has dominance. In spring 2021 (the 2nd spring from grafting), I will cut off the weakest scion entirely and only leave the strongest one to grow. Doing this is supposed to help the rate at which the grafts fill in the wounded space with callous tissue and thus seal off the wound on the host tree.

The first season my little grafts grew about 12” in length. I am looking forward to the upcoming season as they should grow 2’-3’ in length now that they are more established. Hopefully it will not be long before my tree bears me 3 different apple varieties.

Here is your chance to be creative! Growing multiple kinds of apples all on the same tree can lead to spectacular results. I once came across some multi-grafts at a friend’s orchard. He had a Red Delicious tree where he grafted the 4 lowest branches to Golden Delicious. What a pretty site it was in October when both varieties were in full color as it looked like a golden halo around the tree. On another tree he had had red apples up one side of the tree and golden apples on the opposite side.

Perhaps the greatest multi-graft I ever viewed was at Fleming’s Orchard in Gays Mills, WI many years ago. They had an old tree on display that had over 30 varieties on one tree! Each branch was marked with a certain paint color to distinguish what variety it was. Near the tree was a large wood sign with an apple tree silhouette on it. On this sign was a chart showing the paint code and what variety each code was. Truly amazing! So many different shapes, colors ect of apples all on one tree. Not sure if that old tree still stands but it was a real showpiece.