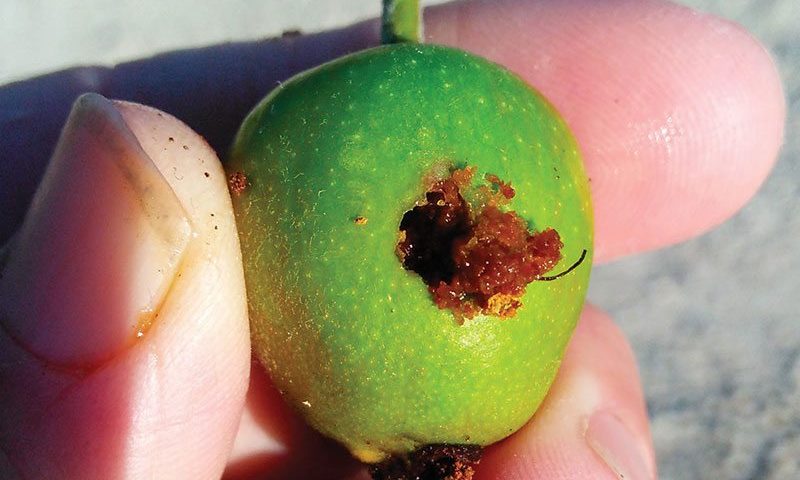 June is the start of our codling moth season. Codling moths are a major pest on apples and to a lesser extent on pears. Here in Wisconsin we normally have 2 generations of codling moths. Codling moths were originally native to Asia but are now found in many growing regions around the globe.

Codling moth larvae overwinter and then emerge as adults in the spring usually around petal fall to June 15th in S.E. Wisconsin (first generation). These adults lay their eggs on young fruit. Once the eggs hatch, the larvae will tunnel into the young fruits usually thru the calyx (located bottom of apple) or chew thru the side of the fruit. The larvae normally tunnel into the core of the apple and eat the seeds. As they tunnel, they push their waste products out of the entrance of the tunnel (frass). This frass looks like a pile of moist sawdust and is a good visual clue that codling moth larvae are present. 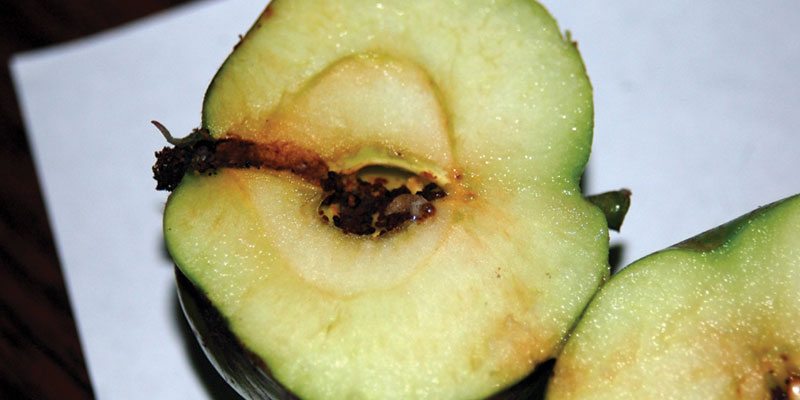 Eventually the larvae will tunnel out of the fruit and pupate into the next generation of adults. Young apples hit by first generation larvae are so small that normally they will abort from the trees in early July. I usually see apples infested by first generation codling moth larvae around July 5th. This year they are slightly earlier as I am finding infested fruits on unsprayed trees the week of June 26th.

We normally get a second generation of codling moths sometime late July-Late August. By then the apples are large enough that they usually fully develop on the tree although they often ripen sooner than non-infested apples.

Control can be obtained by preventative spraying with an insecticide. The key is to spray BEFORE the larvae tunnel into the apple. Codling moth traps can be used to determine if the adults are present or preventative sprays can be applied following an apple pesticide spray chart. If you missed spraying in June to control the first generation, you still have time to prevent damage from the future second generation.

With the almost constant wind and very rainy weather we are having so far this 2017 growing season, spraying for apple pest control has been real challenging this year. Even those who did manage to spray may find some damaged apples. The heavy rainfalls we have been experiencing make it difficult to keep the spray on the fruit in a strong enough concentration for a long enough time to get good results. Hopefully the weather will be better for the rest of our 2017 apple growing season.