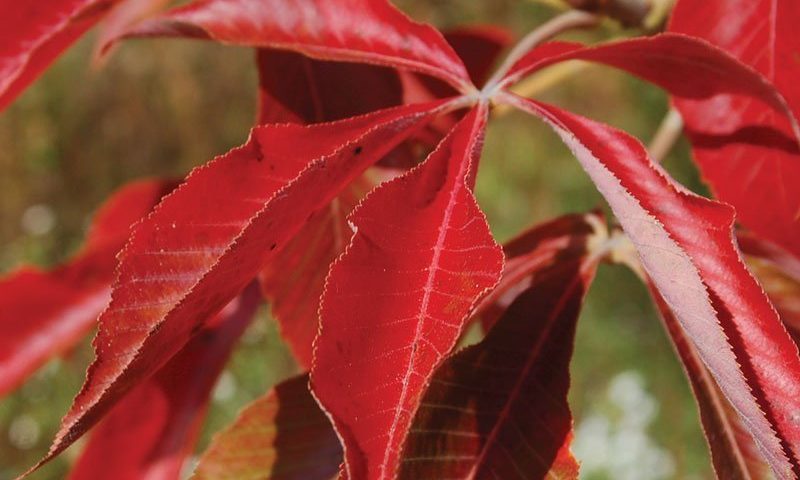 Selected by Mike Yanny in 1981, the original tree has a similar habit and growth rate of other Buckeye seedlings but with improved foliage quality and flowers that set very little fruit. Early Glow™ Buckeye was formerly known as Sunset Buckeye.

Early Glow™ Buckeye is a phenomenal specimen and boulevard tree due to its low mess and unique foliage that is seldom seen in urban areas. Its medium mature size allows it to be planted in conjunction with large stature shade trees like Princeton Elm and Exclamation!™ Planetree, and its shade tolerance means it won’t kick the bucket as these larger plants fill out to their mature canopy sizes. The dense foliage but coarse texture also makes the tree an attractive option where shade and screening during the growing season are desired but not needed in the winter months.

The large, upright, and most of all beautiful flower clusters of Early Glow™ Buckeye are a treat to hummingbirds and are sure to attract a panoply of guests in spring. The seeds are a useful food source for squirrels, although Early Glow™ Buckeye produces very few nuts. The branching habit and dense foliage provides good cover for migratory birds.

All parts of Early Glow™ Buckeye are poisonous when ingested and can be fatal to horses and livestock if planted close to their enclosures. While seed production is low, the tree should not be sited where animals can graze on the foliage, stems, or the few fruits that are produced.

Early Glow™ Buckeye performs best in slightly acidic, moist, well-drained soil but can tolerate a variety of sites if given adequate water when establishing. The tree does develop a taproot which, once established, will allow the tree to tolerate dry sites and the occasional drought. It is also tolerant of alkaline soils, salt spray, and wetter sites. It is, however, intolerant of heavy soil salt and should be planted with caution in areas where winter salts do not flush from soil in spring.

Although the foliage is more scorch resistant than other cultivars, newly planted Early Glow™ Buckeyes can be susceptible to scorch due to their taproot not being fully developed. Make sure the tree receives adequate water when establishing (10-20 gallons per week) to avoid foliar damage. Watering during prolonged drought is also beneficial if the site is excessively dry.

The coarse branching habit of Early Glow™ Buckeye means that canopy raising pruning should be done as soon as the tree can tolerate it. I have seen other buckeye and horsechestnut trees have their form massacred with late-term canopy raising that could have been avoided if the trees were pruned when young. This is especially important if you wish to use Early Glow™ Buckeye as a street tree in a 4-foot-wide terrace or in small parking lot islands. Don’t worry! Canopy raising is easy and essential to avoid conflicts with vehicle or pedestrian traffic. It just needs to be done more frequently in youth to ensure the pruning cuts aren’t drastic and the form isn’t compromised.

All parts of this plant are poisonous when ingested and it should not be planted where horses and livestock are able to eat the branches, foliage, and fruits. Human consumption will cause gastrointestinal distress and can be potentially fatal if consumed in high enough doses.

Newly planted buckeyes can be susceptible to leaf scorch, especially if not adequately watered while establishing in drier sites. Once the taproot has developed the plant is able to tolerate dry soils, but watering in periods of extended drought will keep the foliage happy and healthy through the season.

Japanese Beetle infestations can be problematic. Remove them as they are noticed to avoid defoliation. Avoid using systemic insecticides as this will harm our pollinators that visit the flowers in spring.

Flatheaded borers, mealybugs, anthracnose, scale, powdery mildew, and cankers can be problematic although these problems usually manifest when the tree is already stressed by environmental factors like excessive drought or careless lawnmowers. Keeping a healthy, wide mulch ring under the tree will help mitigate these issues.

The dense canopy can shade out grass below the tree and make it difficult to establish new turf. This is another reason to opt for a wide mulch ring rather than mowing right up to the trunk.

If deer are frequenting your area be sure to use a trunk protector between Halloween and Memorial Day. This will prevent damage from buck rub.

Early Glow™ Buckeye (formerly known as Sunset Buckeye and referred to as such in Michael Dirr’s Manual of Woody Landscape Plants, 6th Edition) is a seedling selection found by Michael Yanny in 1981. The original tree, at about 30 years old, measured approximately 30’ tall by 20’ wide.

Early Glow™ Buckeye gets its name from its bright red fall color in September that arrives earlier than many other trees- including other Buckeye cultivars. Its form and growth rate (9-12 inches/year) seem to be similar to Aesculus glabra seedlings, though it does show better late season foliage quality. Early Glow™ Buckeye produces very few seeds giving it great potential as a street tree. The reason for the near seedless nature of the tree is that the pistils do not elongate enough to be easily pollinated.

Early Glow™ Buckeye can be planted as a mid-story tree in the urban forest with other trees that have a wider or arching habit like Skyline Honeylocust or Princeton American Elm. It can also tolerate Black Walnut toxicity. Below the dense canopy, you can use Trevi Fountain Lungwort for an attractive foliage contrast or Pachysandra as a living mulch.