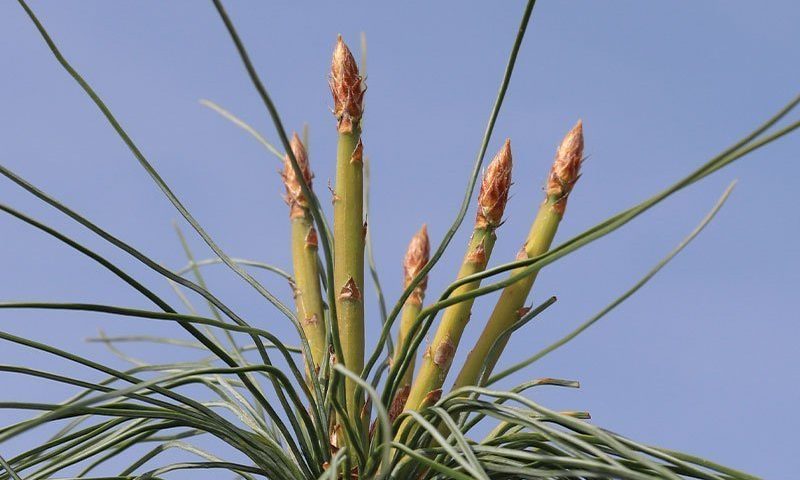 One of our most beautiful native pines, Eastern White Pine is a gentle giant playing a large role in Wisconsin’s history. When planting in an appropriate site, this majestic evergreen will last for centuries. Many cultivars exist that allow this pine to be brought into any size landscape. May also be known as White Pine and Soft Pine.

It can be planted in rows to provide an effective windbreak. Hedging is possible with faithful annual pruning in the candle stage. Mass plantings can be used for erosion control and stabilization. Though not as in demand as its 19th century heyday, White Pine remains a valuable timber species.

Eastern white pines begin producing cones between 5 to 10 years old, the seeds of which provide food for bears, rabbits, squirrels, and at least 16 species of birds. It’s a host plant for the imperial moth (Eacles imperialis). Its lofty branches provide ample nesting and perching sites for birds, such as barred owls and bald eagles. Snowshoe hares, white-tailed deer, and cottontail rabbits browse the foliage.

The chicken fat mushroom (Suillus americanus) has a mycorrhizal relationship with the eastern white pine. The fungi’s hyphae provide the white pine with a boost of nutrients from the soil, while the fungus benefits from a constant supply of carbohydrates that are produced when the pine photosynthesizes. Not to worry if this fungus shows up in your yard; it won’t harm the tree or other nearby plants.

Besides monitoring for pests, little maintenance needed if growing in tree form. Removing lower branches as it gets taller (known as limbing up) may be the extent of care needed. If desired for a hedge, the new growth will have to be pruned in the candle stage in April to keep the hedge contained and increase foliage density. Check out the Pines section in Hedging & Shearing.

White pine blister rust is a fungal bark disease which can kill white pines. Don’t plant currants or gooseberries near white pines as they are alternate hosts of this deadly disease.

White pine weevil is an insect pest which can kill the central leader of young white pines, permanently deforming the habit of the tree. Careful monitoring of young trees for wilting shoots in early summer and promptly pruning out affected limbs will reduce severity of weevil damage.

Limbs can be susceptible to breakage in heavy snow and ice, plant at a safe distance from houses and structures. Intolerant of air pollutants, salt spray from roads, and becoming chlorotic in heavy, clay soils, White Pine is not an ideal choice for urban conditions.

Growing up to 200 feet tall in the wild, early English colonists selected the tallest white pines to build ship masts. The species was extremely important to the settlement and economic development of Wisconsin, particularly in the northern areas.

For a deep dive into white pine history, check out the book “When the White Pine was King: A History of Lumberjacks, Log Drives, and Sawdust Cities in Wisconsin” by Jerry Apps, available through the Wisconsin Historical Society.

Truly a tree to plant for future generations, white pine is one long-living species: up to 250 years.

Cathedral Pines State Natural Area is a 40-acre site in Oconto County which is one of the oldest stands of white pine in Wisconsin. These trees are > 4’ in diameter and are almost at the biological limit for height in our region. The site was fortunate to have escaped logging in the 20th century and contains old-growth hemlock and red pine.

Blueberries, (Vaccinium spp.), Sarsaparilla (Aralia nudicaulis) and Dwarf Bushhoneysuckle (Diervilla lonicera) are all ornamental plants often found in white pine understories. The sight of ferns such as Sweetfern (Comptonia peregrina) growing among the needle-strewn floor of a pine forest evokes a timeless sense of wilderness.