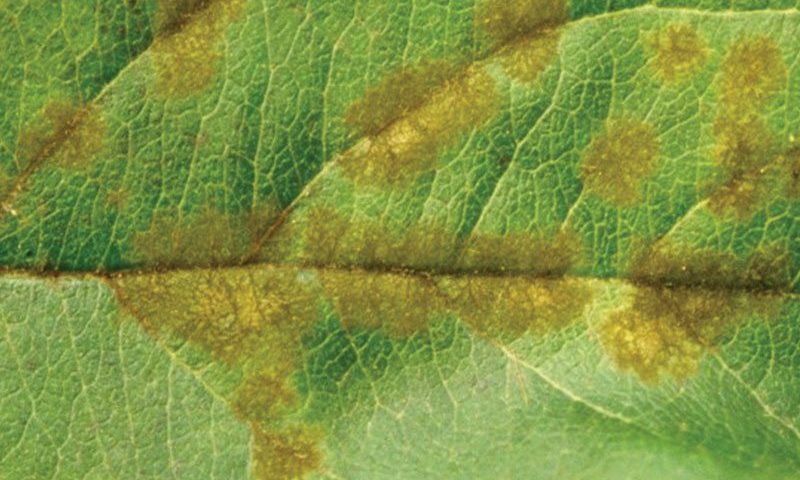 There is more going on with autumn leaves besides the color changes of yellow, orange, and red - fungus. September is when fungal spotting has reached its peak, causing many of your favorite plants to defoliate or go dormant early.

See, in spring, fungal spores are everywhere, dancing and flying around, looking for an unsuspecting host to land on. This is why it’s so important to prune your trees late in the season or when they are dormant. Fresh cuts on a tree are like blabbing the password to a private party and the fungi can easily enter and start trashing the place. This year, I’ve noticed that fungal issues are particularly bad. A cool, wet, prolonged spring, followed by a mild, humid summer is the perfect invitation for fungi.

Common fungal victims are crabapple trees, which are prone to apple scab. Some of the most susceptible varieties are the ones with bright magenta flowers in spring, like Profusion and Prairifire. They put on a gorgeous display of blooms, leaf out nicely with purplish-green leaves, then by mid-August, the leaves start to yellow and drop, until they are nearly bare when September rolls around. Then the cycle repeats itself next year. Generally, white-flowering crabapples like Firebird Crabapple and Adirondak, tend to have more resistance (though not always- fruitless Spring Snow is one of the worst options). If you want something a little showier, Royal Raindrops is a superior alternative with purple leaves and magenta flowers.

Rust is another fungus to watch out for, which can affect anything in the Malus genus as well as Hawthorns (Crataegus). See picture below, left side. Trees first show the effects of rust with yellow spots on the leaves in spring. As the disease matures, the spots turn orange and create visible elongated lesions on the leaves, fruit, and stems. Cedar apple-rust is actually a very interesting disease. It needs a date at the party, Red Cedar (Juniperus virgiana or J. scopulorum), to complete the life cycle. You will notice chocolate-colored “galls” that sit dormant on the evergreen host until conditions are just right in spring. Then the galls burst with what looks like fingers of orange Jell-O (actually called telial horns) which propel billions of fungal spores into the air, looking for a tree to infect. By September, you will have lost most of the leaves and, if you were trying to grow edible apples, your crop will most likely be deformed. I always suggest staying away from native juniper trees if you want to grow apples, crabapples, or hawthorns without doing fungicide applications. We say "trees" because shrub forms don’t harbor the disease - Juniperus communis and J. horizontalis are ok. Or you can plant Asian Juniper species, Juniperus chinensis, which don’t have the same co-dependent, dysfunctional relationship with those ornamental trees.

Perennials and shrubs aren’t immune to fungal problems either. Leaves of Goldsturm Rudbeckia and Redosier Dogwood can end up mostly black with spots by the end of summer. Tall Garden Phlox and Ninebarks will often be covered with powdery mildew (especially if they are not in a full sun location). See picture above, right side. By the time you notice the black spots or the leaves covered in white, you can’t get rid of the disease, but spraying fungicides can keep it from getting worse. As with any fungal problem, spring prevention works best. If spring is a wild party, then fungicides are the bouncer that keeps the party crasher, “Fun Gus” (who isn’t such a “fun guy” , Ha Ha) from getting in the door. If you don’t pay attention, fungi will take over and give your plants a wicked hangover in the fall.