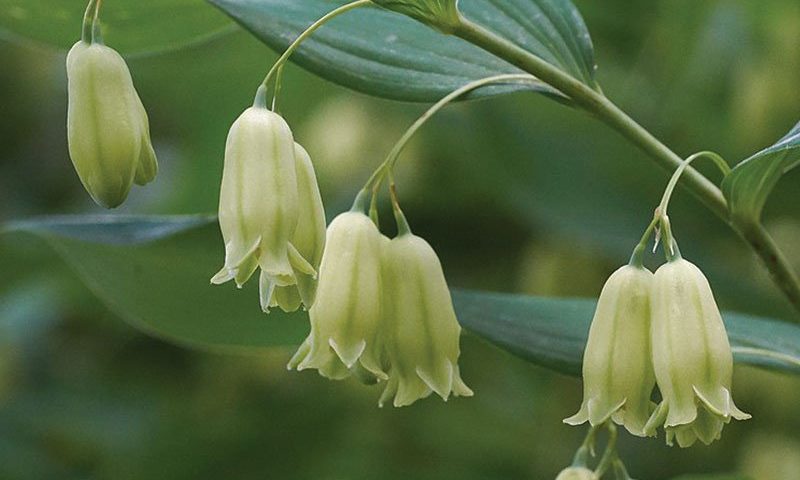 A native, rhizomatous, perennial wildflower that occurs in rich woods throughout WI and many other states. The structure boasts an upright, marvelously arching stem with, bell shaped flowers, usually in pairs of 2 along the underside of the stem. Usually found in a woodland setting, or along forest floors as it naturalizes best in rich, moist, and shady environments.

Best in woodland gardens, wild gardens, naturalized areas, or native plant gardens. May be used in partially shaded borders or rock gardens. Typically grows in mound to 1-3’ tall on unbranched stems. Grows best in average, medium to wet, well-drained soil in part to full shade. Prefers moist, humusy soils. Slowly spreads by rhizomes to form colonies in optimum growing conditions. Small, greenish-yellow, bell shaped flowers- usually in pairs- on short pedicels dangle in spring from the leaf axils along and underneath the arching stems. Flowers are followed by blue-black berries in autumn. Conspicuously parallel-veined, alternate leaves- up to 4” long- are smooth on both sides and turn an attractive yellow color in fall. Does best in rich woodland soils but is quite versatile and will do well at the base of trees.

Giant Solomon’s seal attracts many local species of birds and butterflies. The rhizomes are sometimes consumed by mammals, and the small purple fruits attract birds and small mammals in late summer. The tube-like flowers also attract hummingbirds, and bumblebees will visit the paired flowers when in bloom. This plant is rarely browsed by deer or rabbits.

Requires little to no maintenance if planted in an area where allowed to slowly colonize. Should be sited correctly in a natural garden with semi-moist soil and shade exposure.

Rootstock/Rhizome is jointed, leaf stalk breaks away, leaving distinctive scar said to resemble the official seal of King Solomon. The Rhizomes are starchy and edible- in fact, early Americans even used them as a potato like food. According to Edward Denison, he suggests the name refers to ‘wound sealing properties of the plant’. Early herbalists even believed that plants with jointed rhizomes were helpful in treating human joint disorders

Genus comes from Greek Poly meaning “many”, and gonu meaning “knee joint”, in reference to the jointed rhizomes. Specific epithet biflorum means “twin flowered”. The berries are poisonous due to Anthraquinone, which has a low toxicity and will induce light vomiting or diarrhea.

Good companion plants for Giant Solomon’s Seal are shade tolerant plants that are sited correctly. This includes many types of ferns such as Ostrich Fern or Cinnamon Fern. Any Hosta variety will make for a great leaf texture variation for a woodland type shade garden, and Bleeding Heart (Dicentra) would make a nice companion as it flowers very early in spring and will make room for the Solomon’s Seal to colonize.