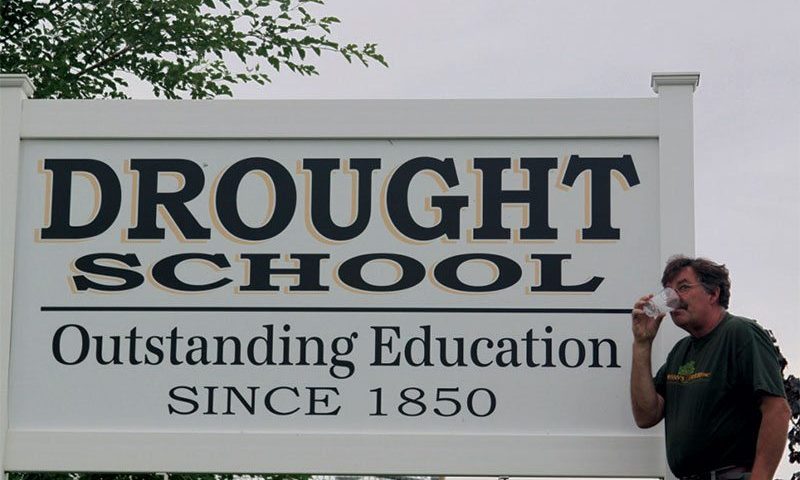 Perhaps the two biggest surprises to me were the incredible declines of Japanese Tree Lilac (Syringa reticulata) and Burning Bush (Euonymus alatus) in established unwatered landscapes. I noticed this throughout the Milwaukee metro area especially with plants that were located on berms or in relatively small planting beds. I think these two plants have one thing in common that makes them very susceptible to drought decline. They each have very fibrous, compact root systems. When we dug small bareroot transplants of these plants in the past, it was always very difficult to shake the soil from the roots of these two species. My theory is that this type of root system design is a disadvantage in a drought. Burning Bush and Japanese Tree Lilacs suck up all the water and nutrients much quicker than most plants which have their roots distributed over a broader less dense area. When rain doesn’t come, they are left high and dry.

Most other conifers have performed admirably in the drought. Pines look outstanding. Junipers were not fazed by the lack of water. There was some branch die-back damage on some young, fast growing Arborvitae in a low lying area of our nursery, but I attribute that damage primarily to a weather event that occurred in the late winter. It was a bark splitting episode caused by rapid temperature fluctuations. Some stems were completely girdled while others were damaged ½ or ¾ of the way around. The arborvitae stems blasted apart by this late winter event then had to deal with the drought. It was not a situation that was conducive to rapid healing, so many plants showed sporadic browning in the summer. I suspect many of the branches would have had a chance to heal and survive if not for the severe drought we had. I did not notice any of this problem occurring out in landscapes in Southeast Wisconsin. Overall the arborvitae in our area fared well this summer.

New transplants left to their own devices performed poorly. Most trees that had been transplanted in the last few years had to be watered in order to survive this drought. One particular street tree planting I have been observing for the last five years was especially telling. The trees were in a median strip with minimal care since they were planted about 5 years ago. I noticed trees in this location that did well and others that struggled. I suspect that some are still not fully established from transplant even though it has been five years since planting. The drought pointed this out to me. Some Green Ash trees lost a considerable amount of foliage as the drought set in while others of the same species planted at the same time maintained their appearance and held onto their leaves. I suspect those that lost leaves still did not have a full set of roots established from transplant. The drought demonstrated the degree of establishment of the trees in this median strip.

Left: A Green Ash Tree, not fully established showing thinning foliage | Middle: Bur Oak faired well in the drought | Right: Cracks, 3/4” across could be found in the ground.

Soil type had a major effect on whether plants were able to make it through the drought. My friend Neil Diboll of Prairie Nursery in the central sands region of Wisconsin told me about his observations of plants near or at his nursery in Westfield. When I visit Neil, I’m always amazed at the differences in the plants in his part of the state versus my southeastern area. I always tell him that my going to the sand country is like going to the moon. It’s foreign to me. Anyway, here are some of Neil’s “other worldly” observations:

Many arborvitae totally fried in the sand. In the clay-loam of the Southeast they were fine. In the sand country, standard sized Norway Spruces were not spared like they were in the Southeastern part of the state. Neil told me of a large specimen tree that he drives past on his way to work that was severely damaged by the droughty, sandy condition. He said, Magnolias are a bad choice for his soils. Neil’s primary area of expertise are prairie plants. He gave me some very interesting insight into what happened to some of the prairie plants in his area. He said he had never seen Big Blue Stem (Andropogon gerardii) and Little Bluestem Grass (Schizachyrium scorparium) compromised by a drought like they were this year. In ‘88, he said Little Bluestem stopped growing and turned a powdery blue. This year many of the plants did the same thing but some also had leaves brown out. The Big Bluestem kept all of its leaves in the drought of ‘88. This year, there was leaf browning on portions of many plants in very dry sands. Plants in heavier soils showed no browning. Another of Niel’s observations that confirmed the drought of ‘12 was worse than that of ‘88 was the wilting of Butterfly Weed (Asclepias tuberosa). He had never seen this occur before. Some plants that he saw that were not fazed by the drought even in his dry sand, included: Showy Goldenrod (Solidago speciosa), Compass Plant (Silphium lacinatum), Hairy Wild Petunia (Ruellia humilis), Nodding Pink Onion (Allium cernuum), Lead Plant (Amorpha canescens) and Purple Prairie Clover (Dalea purpureum). Plants in the sand really have it tough in a drought. It should give us a greater appreciation for the heavy soils of Southeast Wisconsin.

The drought of 2012 was a terrible weather event for many of our businesses and plants. It’s not something we want to see again for many years. However, it was a great learning experience. It allowed us to better understand the drought tolerances of plants we work with. I’m sure all of you have your own set of observations from this experience. Be sure to write them down so you can tell your grandchildren about the Drought of 2012. And that you learned a great deal in this very historic year.