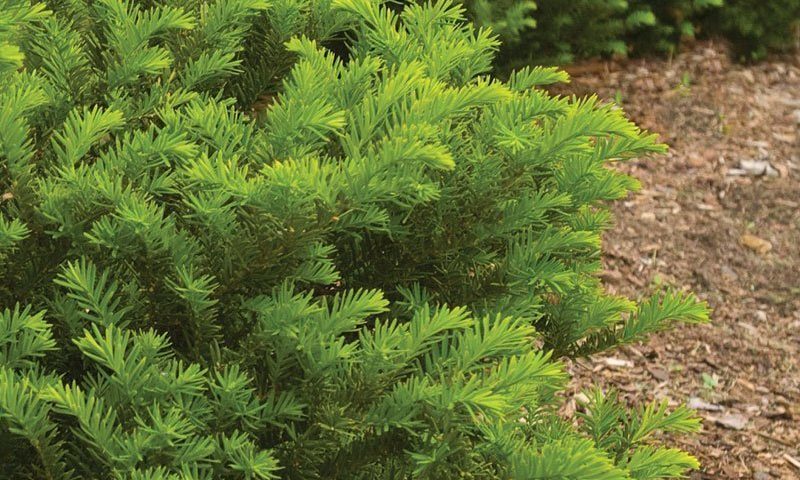 Featured Image: Taxus x media 'Tauntoni', Taunton Yew
**If you are unsure if this method is best for your plant, search for your plant here in our knowledgebase and scroll down to the maintenance section within the plant's profile.**

When should you prune?
- Annually or as needed
- After the first flush of growth, usually in late May or June
- Warning: Do not prune in late summer or early fall because the new growth will not fully harden off before winter
- Pines are the only evergreen to prune while actively growing

Why hedge and shear?
- Create a formal hedge
- Keeps a hedge dense and manageable
- Remove dead, damaged, or diseased branches
- Direct new growth upwards and out from the center of the plant
- Remove crossing or rubbing branches

Hedges will always be a part of our landscape in some way, shape or form. Hedges are popular and can create a beautiful formal look, especially for front yards. However, when pruned incorrectly they quickly become an eyesore. Improperly pruned hedges will show bare, leggy stems at the bottom with a heavy green cap. A properly pruned hedge is dense and green from the top to bottom with a uniform shape.

Generally plants must be sheared after the new growth has flushed, but before it hardens off. Normally, this is in late May or June, although some plants may flush growth again, requiring a second or third shearing. Remember to use sharp pruning shears to prevent tearing a plant's stems.

Basic Rules:
1. The hedge should be broader at the base than at the top
2. The top should be slightly rounded, not flat

These rules help maximize sunlight to the sides and evenly distribute snow load during winter. A slightly pyramidal shape allows sunlight to hit the sides more evenly. Too often people begin shearing their hedges straight up and down. In these cases the bottom receives too little sun, which causes the plant to lose foliage. Each year the base becomes less and less dense until the hedge is completely bare at the base. You should also avoid flat-tops by gently rounding it out - this is recommended in heavy snow climates.

You can revive wild or overgrown hedges by pruning them back at least half way during the dormant season. Then use thinning cuts to remove the oldest, heaviest canes at the groundline. This will stimulate new growth. In addition, the renewed hedge is now at a more manageable height. Warning: Be careful using this method with all evergreens, broadleaf evergreens, burningbush and corneliancherry dogwood. Be selective with which branches you remove and only thin slightly.

Hedging shears may be used to cut several branches at once in a straight line, but you can also create a less formal look with hand held pruning shears. Instead of cutting all the branches, selectively use heading cuts on individual branches to shape your hedge. This method may take longer to complete, but you won’t have to do it as often.

Pruning evergreens correctly can be a difficult task for most people. While shearing may be a viable option for many evergreens, a more natural approach is often recommended.

Yews, Junipers & Boxwood
Shrubby junipers and yews are generally pruned yearly, while boxwoods typically require less frequent attention. Traditionally, these shrubs are sheared after their flush of growth (April or early May). However, a more natural shape can be achieved by selectively heading back the most vigorous branches to a side branch or bud. A second follow-up may be necessary around July, particularly for yews. Not only does this maintain a more natural form, it also creates a smaller, denser plant by inducing more lateral branching.

Spruce, Fir & Douglasfir
Spruce, fir and douglasfir require little pruning after installation in the landscape. Most pruning is done in the nursery before the plant reaches you. Any pruning should be limited to only the new growth, since buds are not produced on older wood. Using hand pruners, prune back to just before an existing lateral bud. This type of heading cut helps add density to the plant and can be useful in filling out thin areas. It is important to remember that you cannot make a spruce, fir or douglasfir smaller. In addition, never prune the leader. If the leader does become broken or damaged and multiple leaders result, simply select one leader and remove the others.

Pines
Pines require a different method of pruning. They are the only evergreens pruned when it is actively growing. The most commonly pruned pine is mugo pine and its many forms and selections, although the principle is applicable to any type of pine. In fact, mugo pines must be pruned every year. If you wish to keep them small, simply snap off a portion of the new “candle” with your fingers before it fully expands. The candle stage refers to the new terminal growth before it fully expands. Do not snap off the entire new candle, since that is the only growing point of the pine. Only remove up to 2/3 of the new candle. Candle pinching keeps the plant smaller and promotes lateral bud formation for a denser plant the following year.