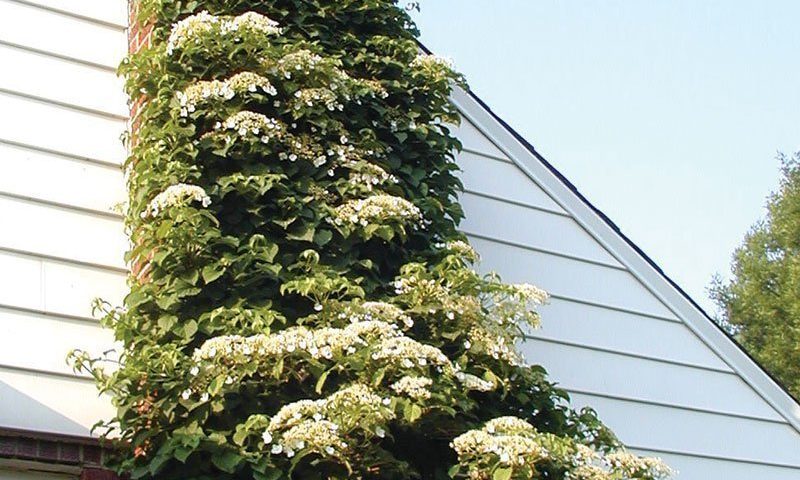 Hydrangea Vine is one of the best flowering vines for shady areas. It produces clusters of aromatic, 6-10” flat-top white flowers in summer. Stems are a dark cinnamon-brown color with exfoliating bark that splits and peels. Fruit capsules remain throughout winter to provide seasonal interest.

Unlike smaller vines like clematis, Hydrangea Vine grows to gigantic proportions and may require stronger supports. And unlike smaller vines which twine around it’s structure, this beast attaches itself with holdfast rootlets called advantageous roots. Typically, it doesn’t cause damage to the structures that it grows on, but you need to consider your site before growing this gentle giant.

You may notice many of our pictures show Hydrangea Vine growing on brick structures like houses, chimneys and walls.

Uses advantageous roots to adhere itself to its structure.

Flowers are attractive to butterflies.

Prune spent blooms after they are done flowering in the summer to encourage repeating blooming and lush new growth. This massive vine tolerates pruning to shorter heights when necessary.

Hydrangea Vines growing/flowering on the side of our HQ in Menomonee Falls.

Susceptible to wilt/stem rot (can be fatal), powdery mildew, leaf spots, rust, and viruses. Potential insect pests include aphids, vine weevils, slugs, snails, scale, and earwigs. Watch for spider mites. Remove branches that may rub against each other, as this creates entry points for insects and disease.

Hydrangea vine is native to the woodlands of Japan, the Korean peninsula, and on the Sakhalin Island. It commonly doesn’t bloom until it’s three to five years old. While there are no known medicinal values, the Chinese did use the vine as a sweetener or condiment. By cooking the leaves, they achieved a cucumber-like taste and boiled leaves made a syrup. The sweet sap was used to create a tea-like drink.

The genus name Hydrangea comes from the words ‘hydro’ and ‘aggeion’ meaning water vessel. This is a reference to the cup-like fruit. The Greek word anomalas references the vine-like characteristics of this plant.