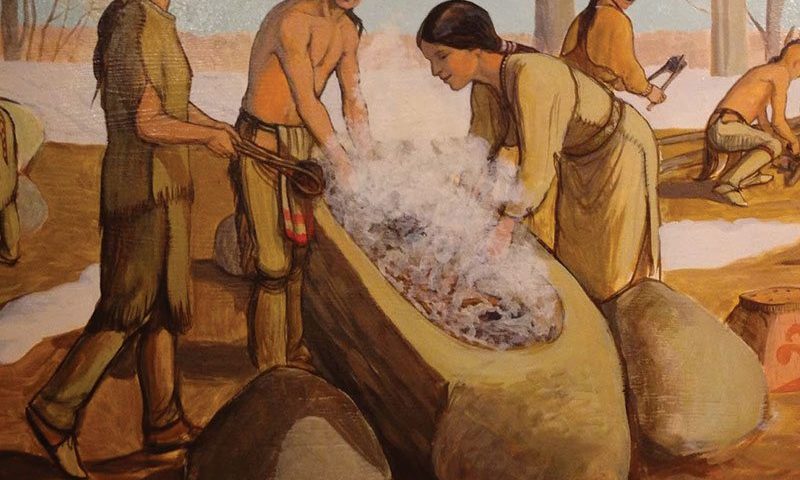 It’s unclear when people discovered that pancakes with maple syrup were the perfect combination, but we sure are glad they did. Traditionally, pancakes were made to use up the decadent ingredients milk, butter, and eggs that were forbidden during the Lenten fast. Thus, Fat Tuesday (Mardis Gras) is sometimes called Pancake Day. In Britain they call it Shrove Tuesday which comes from the Old English word “shrive” meaning “confess all sins”.

Maple syrup has a long history in North America before Europeans showed up with their pancakes. Native Americans have various legends about how sweet syrup used to flow freely from Sugar Maples but the gods were worried that this would make people lazy. They thought people would hang out under maple trees all day, mouths open, syrup running into their bellies (like a primitive keg stand). So the Creator poured water over the top of the Sugar Maples, diluting the syrup to a thin sap which could only be collected at the end of winter. The sweet sap was collected in hollowed out bark containers and could then be boiled into syrup again, or made into maple sugar through a freezing process, which was easier for nomadic tribes to transport.

Quakers and abolitionists preferred using maple sugar and syrup as sweeteners, rather than rely on cane sugar and molasses that was grown down south, the production of which relied on slave labor. The March 1803 issue of Farmer’s Almanac even proclaimed “prepare for making maple sugar, which is more pleasant and patriotic than that ground by the hand of slavery, and boiled down by the heat of misery.” The Civil War greatly increased maple syrup production in the United States and with the invention of tin cans an American industry was born.