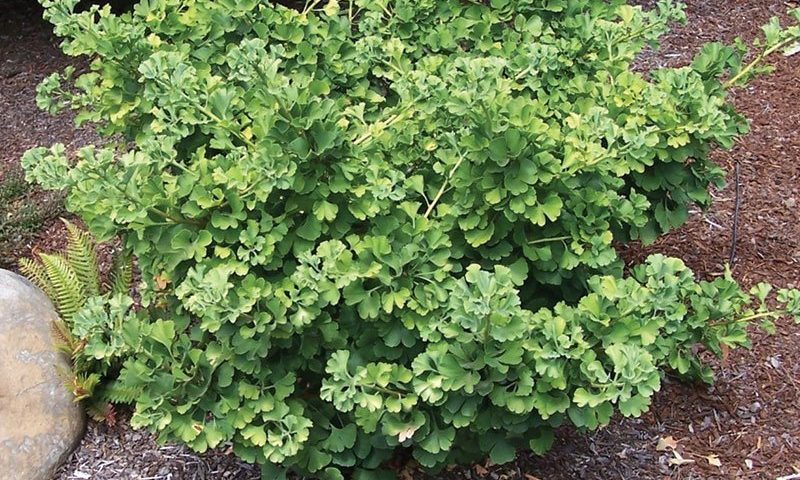 Compact and dense, this dwarf cultivar was discovered as a witch’s broom in Holland and has proven to be an excellent find. Bringing the longevity and staple yellow fall color true its Ginkgo species, but versatility as use as a small shrub-like tree in an array of locations. As a deciduous conifer, Mariken stays small with spreading branches loaded with the fan-shaped, “luck symbol” Ginkgo leaf.

As an architecturally interesting specimen, Mariken Ginkgo can be planted in clay to loamy soils, true to its genus. With its spreading and somewhat pendulous, dense branch structure, use as a specimen planting, in a traditional Japanese Garden setting, along pathways or as a foundation plant. Tolerant of air pollution and compact soils, Markien is great for use in commercial settings as well. Remember, with Ginkgo longevity is the name of the game!

Providing little no to wildlife value, the ornamental features of Mariken Ginkgo makes the case for it. It is a deer resistant selection.

Little to no pruning necessary, as the tree is very slow growing. Preferably planted in average, well-drained soil, maintenance is relatively unnecessary. The habit and form of the dense, spreading tree can be played with through pruning techniques.

With no serious insect or disease problems, slow growth is really the only “downfall” in some settings of this plant. However, knowing that before siting it can be used as an advantage of the cultivar as well. Typically after 10 years the cultivar will have reached a 2-3’ height and width.

Ginkgo trees are a living fossil, with leaf impressions dating back 270 million years!! It is also a readily available medicine throughout the world. A lot of trees claim to be resilient, but how many can say their species has survived an Atomic bomb dropped in Hiroshima? Roughly 170 Ginkgo Biloba survived the blast in 1945. Talk about a living legend! A true symbol of longevity, this tree will most likely outlive generations to come. A single straight species Ginkgo tree can live for over 1,000 years. Learn more about Ginkgo Trees.

This selection was reportedly found as a witch’s broom on a straight species tree in Holland. A witch’s broom is a deformity which occurs on a woody plant, typically a tree in which the natural structure of the plant has changed. The form usually takes place on a branch as a dense mass of shoots resembling often, a broom or birds nest. There are various reasons this occurs, but on occasions a desirable cultivation of the species occurs. This natural process is how Blue Star Juniper and some other dwarf conifers came to be.