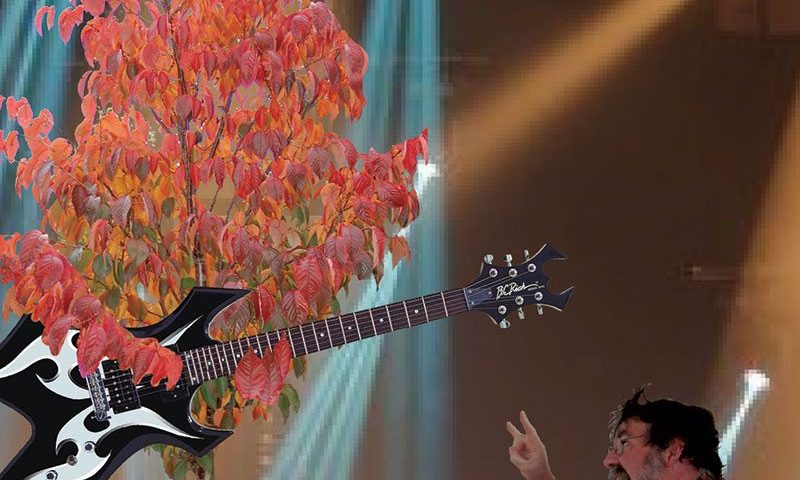 How many of you out there are into Metal? You know—Heavy Metal—not the Switch Grass—or the music—or the art—or the scene. I’m talkin’ about the TREES, MAN!!! METAL TREES!!!

Dudes!!! Dudettes!!! I don’t mean trees that are manufactured in fake Christmas tree factories. I’m talking about real trees here, ones with bark that looks metallic. Trees with trunks that can be mistaken for copper water pipes! I’m talking branches that shine like a buffed out DeLorean! These trees are cool! You like when the leaves fall off of these trees in the autumn because you can get a better look at the fabulous branches. When you see the bark on these trees, you’ll start noddin’ your head just like ya do when ya hear Megadeth’s Symphony of Destruction. WOW!!!

These metal trees are way cool!!!

This is probably the most distinct and beloved of the metal trees. The reddish brown bark peels attractively as the branches age. This kind of bark is often referred to as “exfoliating”. The branches look like copper water pipe. Paperbark Maple is a relatively small tree that typically grows to 20-30’ tall and wide in our area. It is marginally hardy in Southern Wisconsin but has performed very well in the last 15-20 years. It is slow growing, only putting on about 6-12” of new growth per year. Paperbark Maple can have beautiful red fall color, but it has the tendency of coloring quite late (early November). This tree can take some shade but will have the best fall color in full sun. It prefers rich, well-drained soil. It is very susceptible to Verticillium Wilt in poorly drained or heavy soils. The plant is perfectly capable of growing well in sites with high pH. Locating the plant in a protected area where snow can build up and winds are reduced can assure success in southern Wisconsin. The tree is native to Central China but is not a concern for invasiveness. Seeds that set on this species are rarely viable. Those that are sound take two years of stratification to germinate. The reason the plant has not been used more commercially is because of its high degree of difficulty to propagate. Hybrids of this species with Acer nikoense are appearing in wholesale nursery lists of late. The two cultivars that we have begun to grow are Molly Fordham Paperbark Maple (Acer griseum x nikoense ‘Molly Fordham’) and Gingerbread™ Maple (Acer griseum x nikoense ‘Ginzam’). Both of these cultivars are more vigorous growers than the straight A. griseum, however, the bark color of the cultivars is darker and has a greater amount of exfoliation making them less striking. It is presumed that these hybrid cultivars are slightly more cold hardy than the species.

This metal tree is a native to Wisconsin. It is quite abundant in the northern part of our state, but quite rare in the southeast. The bark on young branches of this plant is a yellowish bronze with a somewhat brassy look to it. As the trunks age, the bark exfoliates extensively. I remember seeing a particularly beautiful strain of Yellow Birch at Parfrey’s Glen in south central Wisconsin that had bark that was silver. It looked like the color of stainless steel. I suspect this species may be quite variable in its bark character over its broad range from Manitoba to Newfoundland and south to Tennessee and northern Georgia. In the South, it is only found in cooler environments at higher elevations. As this distribution suggests, the plant prefers cool soils with relatively cool summer temperatures. Yellow birch usually has stunning, beautiful, clear yellow fall color in most years. Unlike it’s cousin Paper Birch (Betula papyrifera), this tree is resistant to the Bronze Birch Borer. One of my favorite things about Yellow Birch are the young twigs. They taste like wintergreen. They are nature’s best toothpicks! Not so much for picking stuff out of your teeth, but for just walking around the woods with a stick in your mouth enjoying the wintergreen flavor. Plus, it gives you a Huck Finn kinda look! Let’s ponder the image of a Huck Finn-like metalhead out in the woods on a nature hike.

This outstanding tree has maroon-brown metallic looking branches with prominent gray-white horizontal markings called lenticels (see image on page 3). Branches 1-1/2” to 3” in diameter are the most attractive. As the branches get larger, the bark ages to a more brownish gray color without the sheen of their youth. Sargent Cherry is grown primarily for its baby pink flowers in very early spring. The flowers range in size from 1-1/4” to 1-1/2” across and open before the leaves appear. The new foliage comes out with a maroon-red color that quickly changes to a rich dark green. Fall color has been a very nice orange-red. I have never seen fruit on trees in the nursery, but it is said to produce 1/3” long, purple-black cherries. Sargent Cherry grows to about 20-30’ tall and wide in our area. This is one of the few cherries that has a good degree of resistance to the various canker diseases so prevalent in the genus Prunus. It is perfectly cold hardy. Sargent Cherry does best in a cool, moist, well-drained soil. I highly recommend installing a mulch ring to the drip line to help this tree thrive. Pink Flair® is an excellent cultivar of this species that has a more compact, narrow, vase-shaped form. It grows to about 25’ tall by 15’ wide. It retains all the other wonderful aspects of this tree including the metallic looking bark.

Pekin Lilac is the lesser known relative of the Japanese Tree Lilac (Syringa reticulata). Both are small trees that grow to about 20-30’ tall and wide. Unlike its cousin, which has rather dull gray, unexciting Lawrence Welkish type bark, Pekin Lilac can have spectacular, shiny, bronze colored, metal bark that can blow you away. There are several cultivars that were selected primarily for this outstanding characteristic. They are China Snow® and Copper Curls™. Other cultivars and seedlings of Pekin Lilac have nice bark but not nearly as spectacular as these cultivars.

Summer Charm is another outstanding Pekin Lilac cultivar, selected for its impressive creamy white flowers though the bark is not as brightly colored as the previously mentioned cultivars.

At Johnson’s Nursery, all of our top grafted Korean Lilacs (Syringa meyeri ‘Palibin’) are grafted onto Pekin Lilac understock. The trunks will have beautiful bark to go along with the cute little Korean Lilac on top (see image above). However, it must be noted not all of the plants will have equally outstanding bark because of seedling variability.

This little known metal tree is just now starting to be discovered by nurserymen, gardeners and urban foresters. It’s a beautiful little tree that is as tough as nails and can have a rich amber to brown, shiny, exfoliating bark. In addition, the branches will have irregularly spaced, diamond shaped lenticels to give them additional character. The biggest trees I have seen have been 20-30’ tall and wide. This species is extremely slow growing. The growth rate is most likely the reason the plant hasn’t been a favorite of nursery growers in the past. Fortunately, there are new, faster growing cultivars entering the marketplace that should solve this problem. Amur Maackia has clean, pinnately compound leaves similar to a Honeylocust. It has small ½” long white flowers in erect racemes (long clusters) in July (see image right). It is said that they smell like new mown grass or alfalfa. Amur Maackia is a nitrogen fixer, which helps it grow in almost any kind of soil. It is useful as a street tree under utility wires or as a small specimen tree in the landscape. It should have full sun to thrive. Two faster growing cultivars that we have begun growing at Johnson’s Nursery are ‘Starburst’ and ‘Summertime’.

The trees mentioned in this article represent the best of the metal trees for our area. I hope they got your heads noddin’. Yeah, these trees are cool, man! Let’s go find Ozzie and chew the caps off of a few acorns!!!