Native Junipers You Should Know 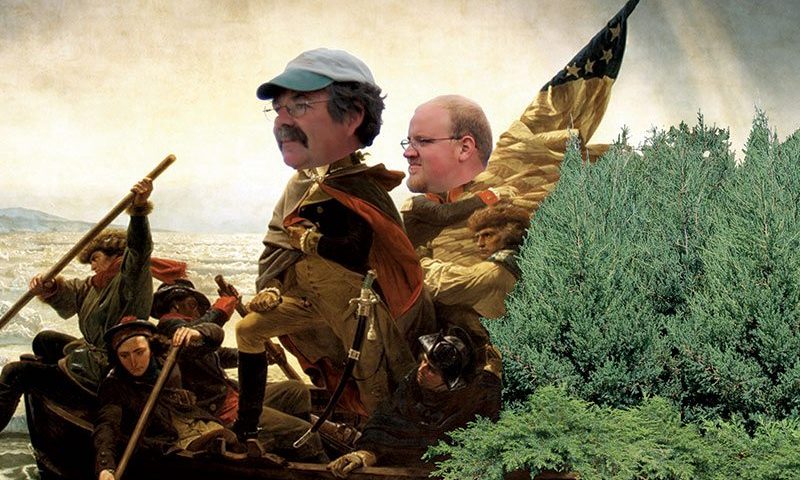 Native Junipers You Should Know

Juniperus virginiana and Juniperus communis – we have a boatload of these plants and they are really nice! I remember growing Juniperus virginiana and Juniperus communis years ago and they didn’t look as good as they do today. The bottom needles would turn brown and the plants wouldn’t let go of them. Persistent brown needles is not a characteristic that you want in your Junipers. They did make great kindling for our burn pile though, igniting as fast as newspaper.

Fortunately, we’ve learned and we haven’t had a Juniper fire since. Go figure.

Johnson’s Nursery now expertly grows these native junipers in containers way better than I ever could. I’m pretty sure it has to do with the water. They’re now grown extremely dry. When I was in charge of the growing, I was watering them daily. Not good. I suspect J. communis and J. virginiana are extremely susceptible to root rot diseases. During extended periods of excess moisture, the disease takes hold and kills off many of the roots. In containers, these root losses cause plants to lose portions of the plants very quickly, thus the needle browning from the bottom up on J. virginiana. In our fields we seldom see the problem with the browning from the bottoms up, but we do have inconsistent success with transplanting. It is not uncommon to lose 30% to 50% or more of seedling J. virginiana plants produced when transplanting B&B. I suspect the plants in the field lose portions of their root systems during wet periods, but not as severely as those in containers. The loss of roots becomes evident only when the plants are transplanted B&B and don’t have enough roots in the ball to recover. We don’t see these kinds of losses when we transplant the named cultivars. These all have been grafted on to Juniperus chinensis ‘Hetzi’ rootstock, which is far less susceptible to root rots.

If you have ever tried to purchase the native Junipers, you may discover that they are difficult to find. It’s not hard to obtain cultivars of the various kinds, but the straight species are rarely available. The root rot problems have made them uneconomical for most growers to produce. Now that we are successful with production in containers, we often have a steady supply of these outstanding native plants. We are continuing our work to develop a B&B production technique that will allow us to have transplantable, large-sized J. virginiana in the future. Fortunately, once they are planted in the landscape, these native junipers are not very fussy and perform admirably.

You may have noticed Juniperus virginiana growing along the freeways in Milwaukee County. They are the tall, upright growing evergreens that turn a bronze-purple color in the winter. They freely reproduce in rugged situations and are among our best native pioneer species to heal the land. It is an incredibly urban tolerant plant. It’s able to withstand salt spray and inhospitable conditions. Juniperus virginiana is dioecious, so some plants are males with only staminate flowers and others are female with the ability to bear cones that look much more like berries than true cones. These cones are sky-blue or navy blue in color.

The berry-like cones are very attractive to a wide range of birds including:

Cedar Waxwings (from which they got their name), Bluebirds, Robins, Cardinals and Downy Woodpeckers. This is a plant that is incredibly useful for naturalizing in tough urban conditions.

The other native juniper that I think is under appreciated is Oldfield Common Juniper (Juniperus communis). It’s also often listed as Juniperus communis depressa, which is probably most accurate for the low-growing forms native to Wisconsin. They are typically spreading evergreens that can get to about 2-4 feet tall by about 10 feet wide in 30 plus years. This plant is the most widespread woody plant species in the world, with native populations in North Africa, Russia, Scotland, Canada, New Mexico and Wisconsin among other places. It is dioecious, just like J. virginiana, but has larger blue fruit that’s about the size of a pea. It is also highly attractive to birds as well as various rodents. In the wild, plants will often times be damaged by fires or rodents to the point where they are opened up and have the character of a bonsai plant. They can be strikingly beautiful!

They are most often found in dry, sandy soils, but will also inhabit heavy clay soils like they do along the banks of Lake Michigan. Soil pH has no effect on them. They are one of the few woody plants that does equally well in highly acidic or alkaline soils. I think the perfect use for them is in open field situations as accent plants. I would love to see them used some day on a links golf course like Erin Hills or Whistling Straits. I bet they were on the original links courses in Scotland way back when. I envision them on the tops of hills or on the edges of sand traps. I don’t play golf but I like to watch it. I think it would be fun to see golfers have to deal with a shot into the junipers.

Anyway, next time you are thinking about natural landscaping or even golf, remember the native Junipers.