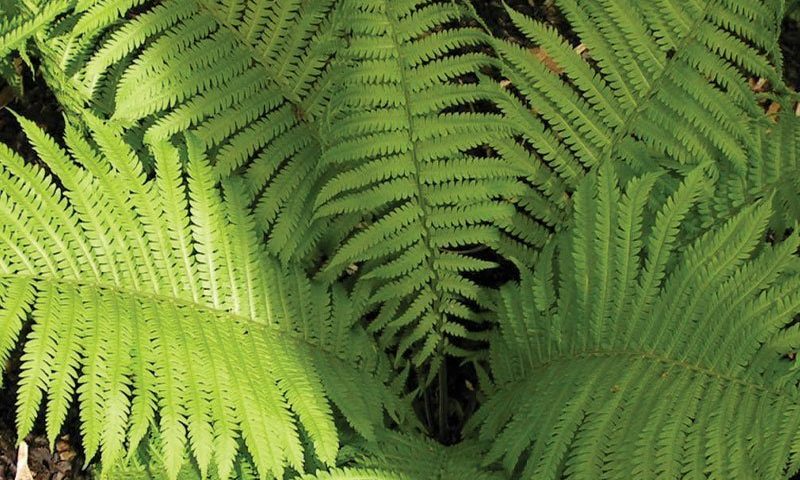 Growing up to 4 feet tall, Ostrich Fern is a dominant aspect of a woody landscape. The easy, maintenance-free perennial is a always a sure sign that spring has sprung. The delicate fiddleheads uncurling in the signature fern-fashion is a spectacular sight that will leave any gardener inspired. Tolerant of sunny to shady locations, this large accent can be paired with any number of flowering perennials to create a tranquil landscape. Although, the Ostrich fern will generally be 4 feet tall in a landscape setting, it has been observed to reach 6 feet in certain sites in the wild. Furthering the claim that an Ostrich Fern can be a dominant aspect of a shady site.

The large bright-colored foliage of Ostrich Fern creates a beautiful clump-forming mass under wooded areas. Although capable of tolerating full sun, it needs to be sited in a location that doesn’t receive immense direct sunlight for long stretches of the day, and has ample moisture in the soil. Metteuccia struthiopteris can tolerate wet conditions and periods of sunlight better than most ferns. White it’s establishing, it’s water needs depend on how much sun it received. Minimal sunlight means less water; more sunlight means more water. Ostrich Fern can be used as a border plant or as a mass to fill in whole areas. It’s best to plant Ostrich Fern in a semi-protected location, in which, the wind won’t be too aggressive and dry out the fronds. The large-beautiful foliage will persist through the seasons until the first frost.

Ostrich Fern will spread by making rhizomes and forming a new colony. Otherwise, the plant reproduces by spores, that release from the sporangia in the summer. These spores carry by wind, allowing Ostrich Fern to spread.

Ostrich Fern is not an essential plant for wildlife. Some animals may feed on the freshly emerging fronds, while other small rare larvae and aphids will suck juices out of the stems. The large foliage creates a wonderful area for small creatures to hide from predators, and for the ground below to stay moist enough to provide nutrients for soil organisms. The moist and protected environment is a wonderful location for many lizards, frogs and other amphibians and small mammals to live.

If you site Ostrich Fern correctly, it won’t require much maintenance. As mentioned above, if the site is regularly moist, then watering constantly is not necessary; however, if the soil undergoes any dry spells within the first two seasons, we recommend you water it regularly.

Ostrich Fern has no serious pest or disease problems. There are rare instances of moth larvae feeding on the stalk (rachis) of the fronds. These larvae will generally do minimal-localized damage. The most common issues arise from lack of (or too much) water. The leaves will dry up when under-watered or get soggy when over-watered.

The fronds will brown and curl if exposed to too much direct sunlight, in the heavy shade the Ostrich Fern will fail to produce fertile leaves.

The fiddleheads (curled new leaves) are edible and often sautéed. Different types of fronds are identifiable when they arise and fade. Vegetative fronds will look wilted by late summer, while sterile fronds will form an upright vase-shape around much less attractive fertile fronds that will form in summer and persist through winter.

The Genus Mattecucia is named after a 19th century Italian Physicist- Carlo Matteucci, who pioneered the study of bioelectricity which eventually led to the invention of the defibrillator.