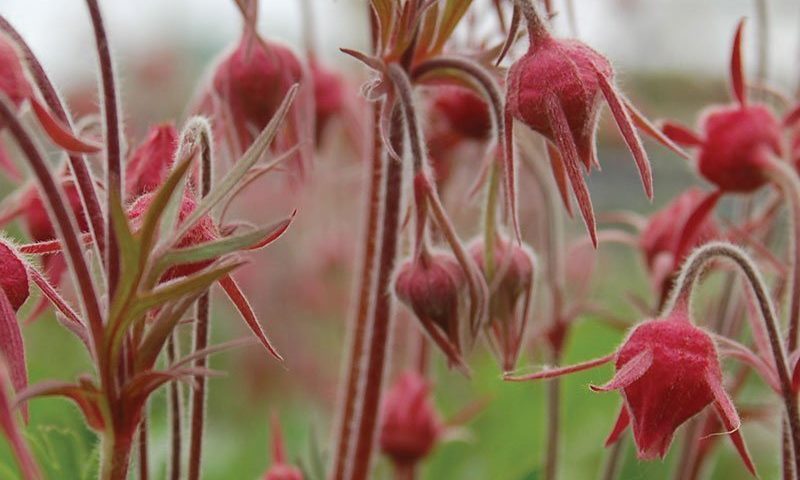 Prairie Smoke is an excellent native perennial for all season interest! In spring sprays of pendulous pinkish-white flowers explode into a striking display of smoky-pink feathery plumes creating a billowy cloud of “smoke”. Its fern-like mounds of foliage remain attractive all season and provide great fall color. An excellent choice for dry sites lacking interest. May also be known as Three-Flowered Avens and Old Man’s Whiskers.

The early season blooms of Prairie Smoke are great for brightening up a border and the smoky plumes extend its interest through summer. Even when the seed heads have dispersed, the low foliage makes an attractive mass through the growing season. Prairie Smoke is an excellent addition to any dry native garden and performs well in sunny, rocky, gravelly sites with good drainage.

One of the major draws of Prairie Smoke is its smoke-like plumes when its seeds mature. However, the flowers can only be cross-pollinated by Bumblebees, as they are the only insects strong enough to open the flower and reach the pollen. Without bumblebees, you will miss out on the smoky plumes in summer.

Prairie Smoke requires little care in the landscape once established. Watering during the first year during drought is important, but once established it will tolerate dry soil conditions. Irrigation should be done by hand as sprinkler systems could over-water Prairie Smoke.

After the flowers have bloomed and gone to seed, the spent stalks can be cut back for a cleaner look. However, this is not necessary from a plant-health standpoint and Prairie Smoke will do fine without dead-heading.

The foliage is a beautiful red in fall and should be left up over winter, similar to a Heuchera. In spring, any brown or dead foliage can be cut back, but the plant does not require much in the way of spring cleanup.

Prairie Smoke can be divided if desired; established plants can be dug up, split, and replanted at the same depth as the original plant. Take care to not damage the rhizomes when digging as these store nutrients for the new divisions.

When sited improperly in poorly-drained soils or areas with constant moisture, Root Rot can be problematic. This is especially noticeable in winter, so take care to site Prairie Smoke in soils with good drainage.

In the right soils, Prairie Smoke has no serious insect or disease problems. Some minor damage to foliage may occur from insects, but this is the plant fulfilling its role in the environment as a food source for wildlife. The fuzzy stems and foliage are not palatable to deer and rabbits.

Prairie Smoke is one of the earliest prairie plants to bloom. The specific epithet triflorum refers to the plant holding its flowers in groups of three. The attractive maroon sepals of the nodding flowers do not open completely; our native bumblebees must force their way in to reach the nectar and pollen. After fertilization, the flowers turn upright and open to release the smoke-like plumes of seeds.

Prairie Smoke has a wide range in North America, from the Yukon Territory to Arizona, across the Great Plains and Lake States, to portions of New England. Several varieties of Geum triflorum are recognized. The variety native to Wisconsin is Geum triflorum var. triflorum.

Prairie Smoke is noted for its peculiar moisture preference depending on where it grows. In the more arid parts of its range, Prairie Smoke is often found in wetter soils such as alpine meadows, moist slopes, and streambanks in mountainous sites. But in areas where grassland habitats mix with moist, forested regions, Prairie Smoke has an affinity for the driest sites. In Wisconsin, Prairie Smoke is found in xeric (very dry) prairies.

Native Americans valued Prairie Smoke for a variety of medicinal uses. The roots and foliage could be steeped in a tea for sore throats, stomach ails, and abdominal cramps.

Prairie Smoke is great as a border or mass, and its small size is best for foreground plantings. Companion plants should be selected for similar soil preference to avoid overwatering. These include Butterflyweed, Prairie Dropseed, Little Bluestem, Sedums, Coneflower, Hairy Wild Petunia, and Asters.