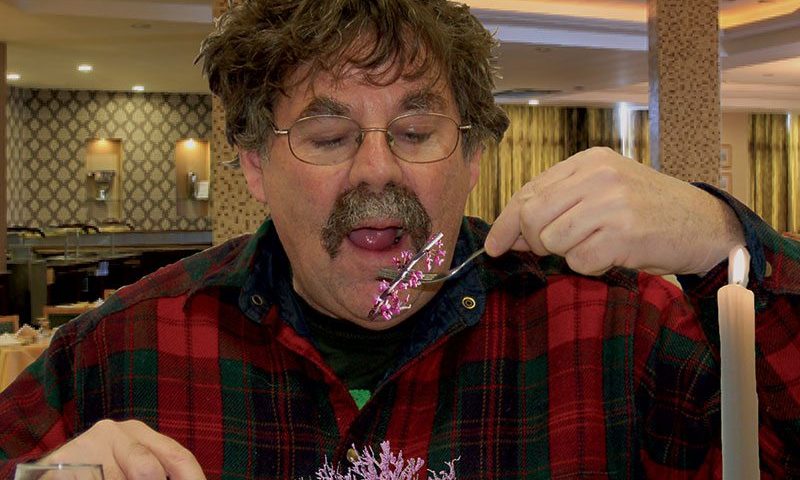 Here at Johnson’s Nursery we have been growing Eastern Redbud trees almost since the beginning of our time. These are beautiful small trees that get to about 20 to 25 feet tall and wide, with a somewhat rounded outline. In flower they are absolutely stunning! They have magenta, pink flowers that outline the branches in mid-May. The flower display is similar to what one sees when people wrap their tree branches with strings of lights during the holiday season. Even large branches, 1” or more in diameter, are covered with flowers. Besides just looking good, they are edible. The flowers taste like fresh pea-pods. They are really quite good. I have been mistaken for a deer grazing on them in the spring. Luckily they don’t bloom during hunting season.

Fans of this tree should visit Columbus in South Central Wisconsin. Each May this little town has a Redbud Festival to celebrate its beautiful trees. Though they are not native to Wisconsin, Eastern Redbud's dominate the medians of the boulevards in the downtown area. Ancient ones (close to 100 years old) can be found in yards in older parts of town. As you enter the town, signs announce that you are in “Redbud City”. The Redbuds of Columbus are famous throughout the United States nursery industry as being the hardiest source for plant production.

I collected seed from some of the oldest ones in Columbus back in the early 80s. I also picked seed from old trees in the village of Chenequa in Waukesha County. For quite a few years we grew our own seedlings all the way up to landscape sized trees. We had mixed results with this endeavor, losing many plants along each step of production. The younger and more vigorous the plants were, the more problems we had with them. It seemed the better the job I did of growing them the more I would lose over the winter. If the seedlings grew to 12” in height in my seedbeds, they would die-back to 8”. If they grew to 18”, they would die-back to 6”. The same thing would happen to the transplants that we put in the field. The most vigorous plants would die back. It really didn’t matter which seed source it was. They died back. I began calling them Deadbuds.

So what was the problem?

It all relates to hardiness. This species is native south of Wisconsin, in Illinois, southern Iowa, and far southern Michigan as well as points east and further south. The plant has hardiness issues in Wisconsin that are primarily evident when plants are in the juvenile stage of life. The Columbus strain of Redbud is subject to this same problem, though not as severely as other strains. Young, vigorously growing Redbud plants continue to grow late into the season when most other species of plants that are well adapted to our area have stopped. These well adapted plants are preparing for dormancy. The foolish unprepared Redbud youngsters are growing like gangbusters when they shouldn’t be. If they are not outright killed, they will have severe die-back which will promote even more vigorous growth the next season. This leads to more late growth that year and more susceptibility to the cruelties of winter. This cycle of die-back and vigorous growth can continue for many years in a row. I call these kinds of plants yo-yo plants. They grow up during the growing season, and then down over the winter. Then they go up the next season, and then down, like a yo-yo. This can happen for many years in a row. Sometimes the cycle can be interrupted by a series of mild winters when they can survive and not die back. Then the plant may be able to get to adulthood, at which point the tree slows down in growth and hardens up earlier for the winter each fall.

Overcoming the issue of hardiness in Redbud for use in Wisconsin is not difficult to do. The first step is to start with an adult plant, not a young seedling. Purchase plants that have reached puberty and are of flowering and fruiting age. Plants with ¾” trunks or larger are usually adult. Plants from the Columbus strain are hardier than others when they are adults. The next thing to consider is properly siting the tree. I recommend putting Redbud in a place where it will grow slowly. You don’t want the trees to grow too fast, which will delay plants from going into dormancy. This slow growing approach flies in the face of most of what we try to do when we site plants. Normally we want to put a plant in a site where it will grow the fastest. We want the plant to have the best it can have. With Redbud, my advice is to do the opposite. Find a site that will slow the plants growth in the long run. Give it competition. Make sure that it will be dry in the summer. Once it’s established, don’t fertilize it. Only water it under extreme circumstances. Don’t baby the tree like many of us like to do with the plants we love the most. You should have success if you take this approach. One word of caution though. Establish the tree as you would normally do with any other. It is stressed enough at this point that it will not grow vigorously. Wait until after it is established to implement the tough love strategy.

One other consideration that must be taken into account if you are going to plant Redbud is its susceptibility to the fungal pathogen, Verticillium Wilt. This plant could be used as an indicator for the disease. It is very susceptible. Because Verticillium is a soil borne disease, either the soil should be tested for the presence of the organism or periodically wet soils should be avoided for planting. For a fee, you can send soil samples to the UW Plant Disease Diagnostics Clinic to be tested.

Eastern Redbud really is a marginally hardy plant in Wisconsin. I am sure any of you who are familiar with the tree will agree that it is a plant that is worth the effort to learn how to grow. Hopefully, the experiences I have presented here will help all of you have success with this gorgeous tree.