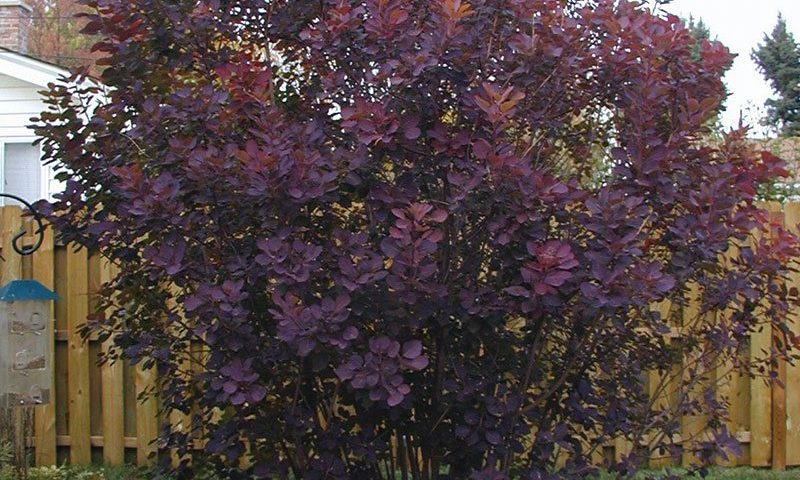 Royal Purple Smokebush does well as a hedge, mass planting, or specimen when left to grow to its full mature size. While the shrub is indifferent to soil texture, it does not tolerate spaces where soil is poorly drained and soggy. We’ve observed the best performance on southern exposures where there is plenty of sun for the leaves to retain their color.

Royal Purple Smokebush is not a significant source of habitat or food to our native pollinators and wildlife.

Royal Purple Smokebush should not be overwatered once established. The species is intolerant of flooding and will do better from mulch rather than excessive irrigation.

As this shrub flowers on new growth, pruning should be completed during the dormant season (winter or spring).

This shrub can be maintained in two ways depending on your goals. If you prefer the deep purple foliage and do not care for the flowers and plumes, you may consider pruning Royal Purple Smokebush to the ground each spring, allowing new growth to shoot upwards with healthy, vigorous leaves. This heavy pruning can be done after the plant has established (typically 3-5 years in the landscape). However, this pruning method will cause reduced flowering as the shrub will be more focused on vegetative growth.

Alternatively, if you prefer the look of the flowers and feathery plumes, and are not concerned with keeping the plant smaller, you can use rejuvenation pruning to keep new growth healthy while maintaining the large form the plant.

Royal Purple Smokebush has no major insect or disease issues. Occasionally, this plant can be attacked by leaf rollers and scale. Verticillium Wilt and rusts may also be an issue if the plant is already stressed. To avoid these issues, keep your shrub healthy by watering and applying mulch as necessary.

Royal Purple Smokebush was selected in Holland by Lombarts Nursery. The cultivar was introduced to the United States in 1953 and quickly gained favor due to its rich purple leaves and year-round interest.

The wood of C. coggygria was once used to make yellow dye.

The Latin name, Cotinus, is from the Greek word kotinos, meaning olive, which makes sense because the branching and habit of a mature Smokebush (or Smoketree) definitely shares similarities to olive trees of the Mediterranean. Genetically, Smokebush is a cousin of Sumacs (Rhus) and cashews. Smokebush is native to China and has been used ornamentally in the landscape since the 1600’s, but its popularity spiked during the Victorian era when they were brought into public gardens. Gardening itself, (that is, gardening not solely for the purpose of filling the larder) became quite fashionable during the reign of Queen Victoria. Science and technology took a leap forward and more diverse plant stock became available. The emergence of a new “middle class” meant that suddenly a larger portion of the population had more money and more leisure time to devote to the yard. A wonderful example of Victoriana gardening can be found right here in the Milwaukee area at the Kneeland-Walker House. The impressive mansion is owned by the Wauwatosa Historical Society and the grounds are lovingly cared for by Master Gardener volunteers, using appropriate plants for the time period.

As a specimen plant, consider pairing Royal Purple Smokebush with low, drought tolerant perennials like Butterflyweed and Hairy Wild Petunia. As a shrub, use companions that have varied leaf texture like St. John’s Wort or Fritsch Spirea.