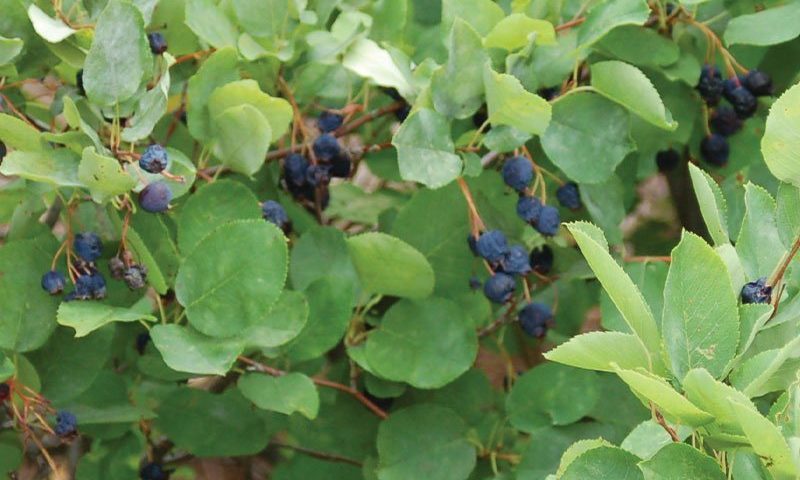 Running Serviceberry is a low-maintenance and adaptable shrub that’s great for natural areas and native gardens. Fruits are a boon to wildlife and people alike. With its upright spreading habit, showy blooms and vibrant fall color, this is a Wisconsin native that provides interest in every season. May also be known as Dwarf Serviceberry, Dwarf Shadbush, and Thicket Shadbush. Botanical name was formerly known as Amelanchier spicata.

Due to its thick, clumping habit, this shrub is ideal for creating a barrier hedge, a bonus of which will be the armloads of blueberry-like fruits that can be eaten fresh, made into jams, or baked into pies. A great native understory plant, use Running Serviceberry in woodland garden settings or naturalized areas to attract wildlife. This shrub will provide four seasons of interest with flowers, fruit, fall color, and winter form! It can also be utilized for stabilizing soil on banks.

The white flowers will attract bees and other pollinators to your garden. Over 40 species of birds will be flocking to the shrub when the fruits are ripe in summer. Rabbits, squirrels, bears, deer, and foxes will also be tempted to snag a juicy treat from its branches.

Running Serviceberry grows best naturally, with little pruning needed. If necessary, prune in late winter to get rid of dead or crossing branches.

This Amelanchier has no serious pest problems. Netting may be useful if you’re trying to protect the fruits from birds to eat them youself.

The alternative name “shadbush” refers to the historical tendency of Amelanchier to bloom at the same time as when American Shad (Alosa sapidissima) swim upriver to spawn.

Tribes native to the northern Great Plains would mix serviceberries together with bison meat and stuff into the animal’s intestine to create a sausage-like food called pemmican.

Combine with other wildlife-friendly naturalizing shrubs such as American Plum (Prunus americana) and Downy Arrowwood Viburnum (Viburnum rafinesquianum). Pair with Redosier Dogwood (Cornus sericea) to maximize winter interest while providing an abundance of summer fruit for birds. Adding a white blooming crabapple such as Firebird® Crabapple (Malus sargentii ‘Select A’) or Sugar Tyme® Crabapple would enhance the bloom effect and extend the birding season into fall and winter.