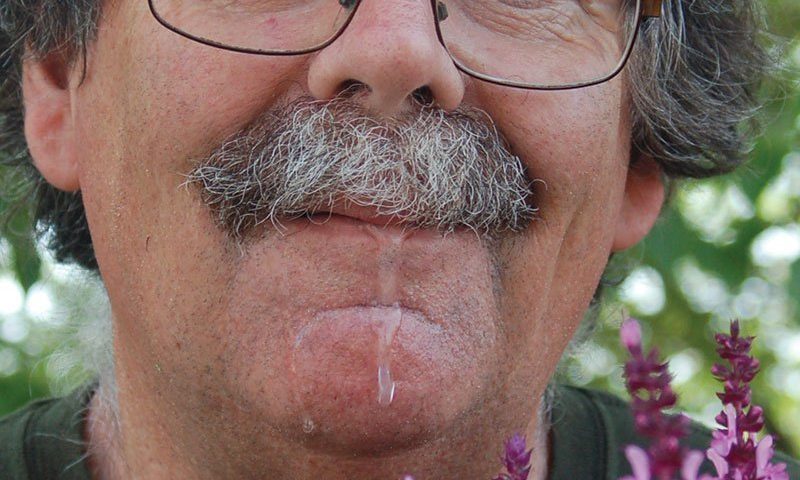 I’m sure many of you are thinking, “What kind of drool is going to come out of his month?” Well it’s saliva, ladies and gentlemen,--not drool. And I’m salivating over Salvias. So let your tongues wag, and get your handkerchiefs ready while I tell you about this fabulous group of perennials.

First of all though, I must tell a true story about Salvias and the proper pronunciation of the name. My wife, Lori, and I were walking through the Boerner Botanical Gardens in Hales Corners several years ago, enjoying the beautiful flower beds. As we were strolling, there was an older couple just ahead of us also enjoying the garden. I suspected it was a husband and wife. It had to be. The husband was quite talkative and demonstrative, acting as though he was a horticultural tour guide and his wife a curious student of gardening. As we got closer I could hear what he was saying and as is a bad habit of mine, I began eavesdropping. He was truly a know-it-all, telling his wife how he grew this or how that plant has nice flowers and how they should put these along the south side of their house. His wife just nodded her head with approval with little to no verbalization. She seemed interested enough. It just looked like she was a bit tired. It was then that he demonstrated to me his understanding of the genus Salvia. He pointed to a group of some Salvias in the trial garden and said to his wife, “We should put some Salivas like that on the edge of the vegetable garden.” His wife nodded again and again and slowly kept walking, trying to keep him moving so that she could eventually get to the end of the tour. She was definitely tired. At this point, I don’t think she was listening.

Lori and I were. We quickly scurried along down the path to get some privacy, giggling all the way. She had heard the Saliva reference, as well. When we were alone, I said to her, “Lori, did you see the Salivas drooling all over the edge of the bed and into the walkway?” Her giggle turned into a full blown laugh and we have been enjoying this 5th grade horticultural humor ever since. Every time we see Salvias we think Salivas.

Thus, we have this month’s Plant Talk on this engrossing subject. Sorry! The proper pronunciation of the genus Salvia is SAL’ VEE-A.

It is the most extensive of all genera in the mint family, Lamiaceae, with over 700 species including shrubs, annuals and perennial types. The common name of Salvia is Sage. The herb called sage that is used in cooking is a type of Salvia (Salvia officinalis). For this article, I’m going to concentrate on five outstanding cultivars we grow at Johnson’s Nursery of the perennial species Salvia nemerosa (sometimes called Salvia superba or sylvestris).

Salvia nemerosa are wonderful plants known for their long blooming period, disease free fragrant foliage, and their ability to attract numerous species of butterflies. Hummingbirds also snack on them. Deer leave them alone. Because of their relatively low stature, 12” to 30” when in flower, they are useful from the front of the garden to the mid-range level. They add a pleasing vertical element to many designs.

Salvias should be planted in full sun in a well-drained soil to get their best performance. Over-fertilizing or too much shade can cause the plants to become floppy. Salvia nemerosa plants have clean, rich green foliage that is relatively close to the ground from which the flower spikes arise. Once the flower spikes begin to lose their petals and their appeal, they should be cut down to their base near the ground to allow for another flush of bloom. Many gardeners resist this drastic type of cut and spare the foliage at the bases of the flower stalks. I don’t.

I think the plants look much cleaner and fresher if taken back harder to allow a full renewal instead of leaving 3-4” of stalk. Very soon another batch of leafy rosettes and flower spikes will appear. This technique can be used two or three times in the growing season to keep your plants looking good. I recommend dividing plants every three or four years in order to lower the crowns of the plants. They seem to raise themselves up over time making themselves subject to winter kill. For best results, use a sharp spade in early spring once you can see sprouts shooting and determine what has survived the winter. Then replant them lower in the soil so that the crown is at the soil surface. I call this renewal division.

Whether you call them Salivas or Salvias, I strongly recommend giving these plants a try. There are many new cultivars on the horizon. They certainly are a wonderful group of tough perennials that are worth salivating over. After reading this, I’m hoping you will never think of Salvias the same way again. Sorry!!! Drool……drool……….droooool. 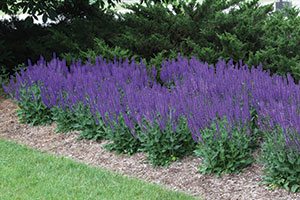 This cultivar has been a long-time favorite of mine because of it’s profusion of 18”-24”, violet-blue flower spikes from June to August. It is a rare color in the garden and may only be matched in intensity by some cultivars of Delphinium. It also responds well to cutting back after flowering to get repeated flushes. Over fertilizing or too much shade can cause some flopping with this variety. 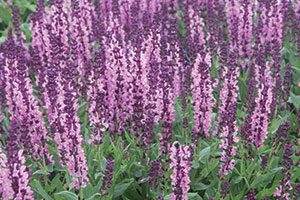 This new cultivar is really a good one. To me it looks like a bright pink form of ‘May Night’. It has a similar size and constitution getting to 16” tall and has a good compact habit. It blooms slightly earlier than the other salvias. The plant is a robust grower and has strong dark purple stems. It is sometimes confused with the older cultivar ‘Sensation® Rose’ which has flowers that are duller pink color. 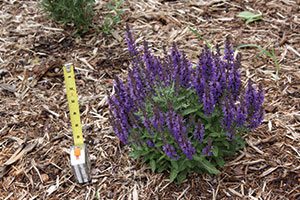 To me this cultivar looks like a dwarf May Night. Its flowers grow only to 1’ tall and are the same flower color as May Night. It blooms from June to August and responds nicely to being cut back. Of all of the Salvias we carry, this is the plant that would give some leeway as concerns a bit of shade. It would be the least likely to flop though like the rest is best grown in full sun with well-drained soil. 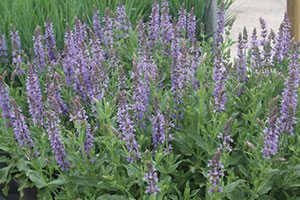 Blue Hill Salvia is a beautiful long blooming perennial that starts flowering in June most years and keeps flowering on and off until August if cut back as indicated. It has glorious, true blue spikes of flowers that grow to 18”-24” in height with stiff, sturdy stems. Over fertilizing or too much shade can cause some flopping with this variety.

Cardonna Salvia has incredible violet-blue flower spikes from June to August. Although its flower color is similar to some other cultivars, Cardonna is distinctly different in appearance because it grows to a taller height of 24”-30” and has stems that are dark purple instead of the usual green.