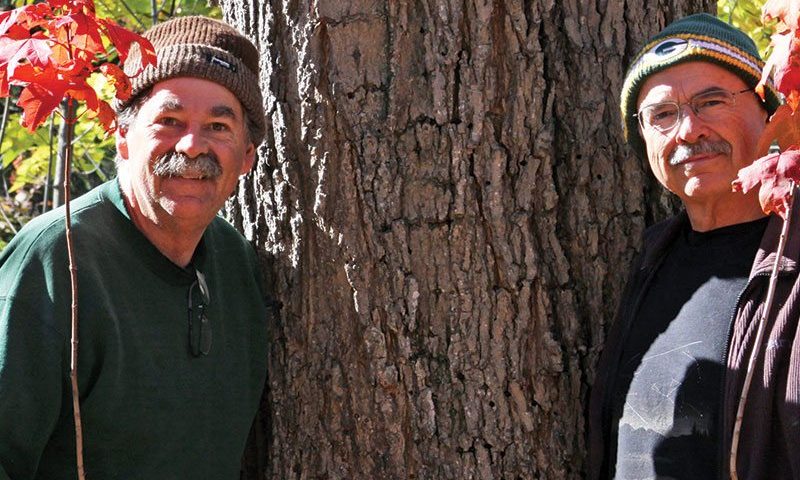 My friend Karl told me one time that he thinks he’s part Sugar Maple (Acer saccharum). Ya really! He told me he is related to the tree. He says it comes from his father’s side of the family because they were foresters and were always in the woods. Now, I’m familiar with interspecific hybridization. It’s a really cool thing, especially for plant breeders like myself. But inter-kingdom hybridization??? A hybrid between a plant and an animal??? Could that actually take place? I doubt it.

When I think about it, I realize that Karl has all kinds of Sugar Maple type characteristics. How can that be explained? He’s unbelievably in touch with nature. He always wants to be outside. Heck, he went for over a year without a stove in his house, cooked outside everyday, and loved it. I’ve been to dozens of parties at his house and they were always outside, under a giant Sugar Maple, with a campfire and food and plenty of drink and good company.

The ritual when you go to his home is to tour his yard which is a woodland that he has developed and tended since he was a child. He knows all the plants in his woods. He knows which ones he planted and which were planted either by themselves or other creatures that live there. When he goes on vacation it’s always to a natural area and most often woods. Of course, he camps. He’s a photographer. 90% or more of his photos are of plants or natural objects or scenes in the wild.

Ya know, I think Karl could be part Sugar Maple maybe not by direct inter-kingdom hybridization but possibly via environmental influence. I think he has learned much from the Sugar Maple trees in his yard. Have they really become part of him? He’s a truly natural man. He’s a NUT! No, I shouldn’t say that. Karl is a samara. (the winged seed of a Sugar Maple)

I think a lot of people in Wisconsin have a bit of Sugar Maple in them. Not to the extent of Karl, of course, but a little. I bet most of us have had Maple Syrup on our pancakes from the sap of Wisconsin Sugar Maple trees. I’m sure most of us have played with Sugar Maple in the form of a baseball bat, guitar, or drumstick. Or we have bowled on an alley made of Sugar Maple. Or leaped from a basketball court with the tree’s wood giving our sneakers some extra lift. As a child, I was fascinated by my grandparents’ stairway. The runners were made of a wood that had little eyes peeking up at me. It was only when I got a little older that I learned the wood was Bird’s Eye Maple, a variant of Sugar Maple that is most prevalent in Northern Wisconsin and the U.P. of Michigan.

Sugar Maple is important to us here in Wisconsin and that is why it’s appropriate that it’s our State Tree. It’s also the state tree for New York, Vermont and West Virginia, making it the most popular species for state trees in the nation. What a tree!

The species is native throughout the eastern United States and Canada from Nova Scotia and New Brunswick over to Southeast Manitoba, down through Missouri and a bit of Eastern Kansas over to the Appalachians of North Carolina and up the East Coast through northern New Jersey and all of New England as well as everywhere in between that massive outline. It’s quite a broad range and through most of it the tree is dominant, being a major player in the forest that bears its name–a Sugar Maple Forest.

Sugar Maple is the king of the woods. It produces prodigious amounts of seed in some years that coat the forest floor. I noticed this in the spring of 2014. Newly sprouted sugar maples were thick on the ground of the woods. There were millions of them!!!

They were thicker than the hair on a dog’s back! I’m sure they will thin themselves out over time but many will survive and live in the shade of their parents until their opportunity to grow to the canopy. Sugar Maple differs from the other trees in the forest because their young can grow in the heavy shade of the forest.

As kings, Sugar Maples have many servants that support them in their rise to prominence. For instance, the Black Cherry, Hawthorns, and Ash trees among others are the pioneer species that prepare land for the Sugar Maples to live in. These other species move into open areas, grow up, then drop their leaves. Over many years, these servants develop the leaf mulch ground layer that feeds the soils, welcoming Sugar Maple to the woodland. The Maples are not capable of invading new open areas on their own and taking over.

This helps explain why Sugar Maples are best used for landscaping in rich, well drained soils. They need to be mulched and watered during a drought. We have to treat them like the kings they are.

Particular attention should be paid to drainage when siting Sugar Maples in landscapes. If at any time water sits at the base of the trees it may encounter Verticillium Wilt fungus in the soil. This disease can slowly kill or disfigure trees. The pathogen invades the vascular tissue (plant veins) through the roots and cuts off flow of water and nutrients. It’s perhaps the number one killer of Sugar Maples in our area.

Fall color is what I think of most when the topic of Sugar Maple is brought up. To me, this is the tree that defines fall color in Wisconsin. The magnificent yellow, oranges and reds that this species can develop is what weatherman on the T.V. news call peak fall color. I have been watching T.V. and fall color for the vast majority of my life. Though I don’t watch fall color on T.V., (That must be viewed live!), I find it amusing how T.V. weathermen have maps of the state showing the progression of fall color from north to south with portions of the state indicated to be 20% fall color and others to be 50% fall color and others to being at peak. It’s almost as if this is a volatile event similar to the stock market. It isn’t.

Basically, all the trees turn color in a certain order each year. The fall color progresses from north to south based on day-length triggers. Those triggers begin abscission layer formation and to cut-off chlorophyll production in the plant’s leaves. The chlorophyll dissipates and the yellow, orange and red pigments begin to show. I would like to see the weathermen show the maps and tell which species of plants are at peak in areas of the state each week. That way we could enjoy the various treats of each species and of course know when it is at traditional peak color which is, of course, when the Sugar Maples are in their autumn glory.

Because Acer saccharum has a broad geographical range in North America it has developed numerous variants that can be utilized for specific landscape purposes. For instance, plants on the western edges of the range of the species show extraordinary drought tolerances compared to their relatives to the east. They may be used in more inhospitable urban situations than the more pampered conditions I described for the kings of the forest earlier.

Two of the sub-species that can be used to extend the adaptability are A. saccharum nigrum and Acer saccharum schneckii. A. sach. nigrum is most common and pure in Iowa, southeast Minnesota, and to a lesser extent in western Wisconsin and Illinois. It readily hybridizes with straight Sugar Maple resulting in trees with varying degrees of drought tolerance. Acer saccharum schneckii is a western subspecies from the edge of the range in Missouri, points south, and intergrades into A.s.nigrum as you move north. It’s thought that the cultivar ‘Legacy’ is derived from this provenance. ‘Legacy’ has very thick, tater proof leaves, but it has suffers winter damage at our nursery on occasion. It also doesn’t fall color consistently because it goes dormant later than trees from Southern Wisconsin provenance. It’s an excellent tree for latitudes south of us.

The importance of this discussion is that cultivars or seed-grown trees from these distant parts of Sugar Maple’s total range should be selected for use based on these specific provenance adaptive characteristics. One has to pay attention to what latitude the plant came from originally. This will assure hardiness and proper development of fall colors. It brings into play the importance of regional cultivars.

Sugar Maple sure is an interesting tree! It’s a heritage tree – one that you plant for your grandchildren. I think that it is important for us to inflict as much Sugar Maple influence as possible on future generations so that we get more people like my friend Karl—samara.

Our field tests here at Johnson’s Nursery show that some of the best performing cultivars for our part of Wisconsin are as follows:

The Apollo® Sugar Maple is a compact, columnar formed tree selected by Bob Cole in an Ohio landscape. Introduced by J. Frank Schmidt & Sons Nursery in Boring, Oregon. The tree has thick, dark green foliage which withstands summer heat. Fall foliage color is yellow-orange to red. This cultivar is ideal for restricted spaces and can make an excellent tall hedge.

Crescendo™ Sugar Maple is a Chicagoland Grows® Introduction. It was selected from a hedgerow at The Morton Arboretum in Lisle, Illinois. The landscape architect for the arboretum noticed it because of its beautiful, consistent, orange–red fall color. The tree has a broadly oval outline with a uniform branching habit. It has better drought tolerance than the typical Sugar Maple likely because of its thick, durable foliage. Like all Sugar Maples, it needs rich, well drained soils and a generous mulch ring to become the specimen beauty it deserves to be.

Fall Fiesta® Sugar Maple has an upright habit when young and rounds out to an oval as it ages. It was selected for its good growth rate and consistent orange–red fall color. The tree has dark green, thick, tatter resistant foliage. This outstanding Sugar Maple cultivar is a Bailey Nurseries introduction.

Majesty® Sugar Maple originated at Flax Mill Nursery in Cambridge, New York. It was selected for its rapid growth rate and well branched, symmetrical oval head. It is a very hardy cultivar, being able to withstand temperatures to -35 degrees Fahrenheit. It shows excellent resistance to sunscald and frost crack.