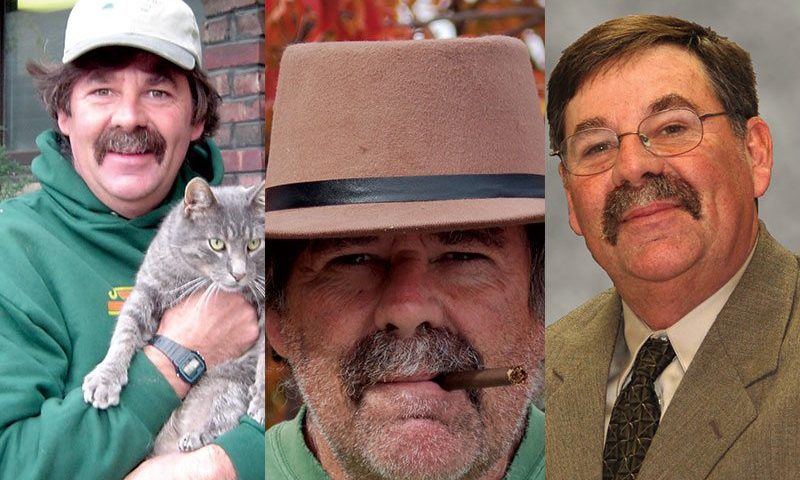 You see, sumacs can be heroes with character flaws, just like Clint Eastwood in the movie. Most are good to have along the roadsides where they perform admirably even under extremely tough conditions. The bad sumacs are really bad!!! Poison ivy and poison sumac are like the bad guy in the movie at his murderous worst. They can torture you for weeks on end after an unfortunate encounter. In the fall, all the sumacs are beautiful, with foliage colors of magnificent maroon to red and oranges and touches of yellow. Even the poisonous species have beautiful fall color.

Just like in the The Good, the Bad and the Ugly, where Clint Eastwood is sometimes despicable and at other times caring, the good sumacs can sometimes be evil. Staghorn Sumac (Rhus typhina), Smooth Sumac (Rhus glabra), and Shining Sumac (Rhus copallina) sucker profusely, and are despised by people with small yards that need to control them and can’t. However, like Eastwood’s good side in the movie, these same species can sooth us as we drive by on the freeway in a race to wherever.

Three species of sumac look very similar in form and habit and are found commonly on the roadsides, in the hedgerows and along the woods edges in Wisconsin. These are Staghorn Sumac, Smooth Sumac, and Shining Sumac. They typically get 10-20’ tall and sucker to form colonies usually about 20-30’ across. All three of the species occupy similar early successional niches in our native ecosystem. They all have large, pinnately compound leaves and prominent rusty-red terminal fruit clusters that usually last into late winter. The plants are dioecious, so fruit can be expected on female plants only. The fruits of these three species can be steeped to make a lemonade-like tea that is very healthy for you. The three species differ in several ways. Staghorn Sumac has brown, fuzzy, coarse twigs that resemble a buck in velvet. That’s where it gets its common name. The fruit on this species is also fuzzy, with lots of tiny hairs on each berry in its fruit clusters. The Smooth Sumac and Shining Sumac are smooth both on the twigs and the fruits. The leaves of the three species differ slightly as well. Staghorn Sumac has leaves that have a hairy leaf stem and rachis, the stem that the leaflets are attached to. Smooth Sumac has none of the hair on the leaves. Shining Sumac has wings on the rachis and is so shiny it looks like the leaves have been waxed.

One cultivar of Staghorn Sumac that has become very popular in recent years is Rhus typhina ‘Baitiger’ PP16,185 - First Editions™ Tiger Eyes® Cutleaf Sumac. It has stunning, bright gold, summer foliage and a less aggressive suckering habit. It can be used in more confined areas than the straight species. Its fall color is spectacular, with intense scarlet, oranges and reds. Tiger Eyes has foliage that is dissected, giving it a more fine textured, ferny foliage effect.

Staghorn Sumac, Smooth Sumac, and Shining Sumac are all native to Wisconsin. From what I have seen, Smooth Sumac is the most common species found in the wild in the Southeastern part of the state. It seems to be more tolerant of heavier soils than the other two species. As you travel northwest from the Milwaukee area and into the central sands region of the state, Shining Sumac is the most common sumac. It prefers acidic soils. Staghorn Sumac is found in lighter soils with little preference for soil pH and ranges farther north than Shining Sumac. Diseases or insects do not seem to bother these three sumacs with the exception of Verticillium Wilt on Shining Sumac and Staghorn Sumac in heavy soils.

Fragrant Sumac (Rhus aromatica) is another outstanding species native to Wisconsin. It is very rare in the wild. I have never seen it in its native setting. Herbarium reports show it growing in a few locations in very dry, sandy areas. This species is very widely used for residential and commercial landscape planting. Because it doesn’t sucker it is a much more manageable plant in our typical, small scale, urban landscapes. The species can grow from 2-6’ tall with a spread of 6-10’. The plant is wide spreading and will layer its branches as a method of moving. Fragrant Sumac is extremely variable in size between individuals produced from seed. The cultivar ‘Gro-Low’ was selected by Ralph Synnesvedt of Glenview, Illinois for its low stature. It only gets two feet tall. This cultivar has become extremely popular in our area for this reason. It is very useful for massing in parking lot islands, on steep hillsides and in planting beds where uniformity and low maintenance are required. No serious disease or insect problems occur with it. All the fragrant sumacs, including the cultivar Gro-low, get colorful orange-red fall colors. This species is one of the most useful of landscape plants. It’s definitely a Good one!

Some bad native Sumacs or Sumac relatives that you should know about are Poison Ivy (Toxicodendron radicans, formerly Rhus radicans) and Poison Sumac (Toxicodendron vernix, formerly Rhus vernix). Both plants can be responsible for a nasty rash that you wouldn’t wish upon anyone. It is all due to the chemical urushiol which is present in both Poison Ivy and Poison Sumac. Contact with plant tissues especially when in active growth can cause a painful rash that can last for weeks. The best way to identify both of these plants is by the clusters of BB-sized, white berries that persist on the plants for much of the season. Poison Sumac looks similar to Smooth Sumac but only grows in swamps where Smooth Sumac doesn’t grow. Poison Ivy is very common in Southeast Wisconsin mostly in hedgerows or on the edges of woods, but sometimes is even found in the understory of open woodlands. It grows as a suckering groundcover and vine. I have seen it attach itself to trees and climb 30’ or more. It is a beautiful looking plant with bright orange-red fall color but not one that gets along with people. I am fortunate. I am not susceptible to the rash. When I was taking the pictures for this article today, I stood in a patch of Poison Ivy to take them. I will wash my clothes separately this evening when I get home. This should help keep my marriage status intact.

The beauty of sumacs should not be overlooked just because they are common. There is beauty in the unity created by their repetitive masses over large stretches of land like you see along Milwaukee’s freeways. It’s what makes hundreds of acres of golden wheat next to hundreds of acres of verdant corn a picture of solace. The suckering Sumacs not only form large individual masses but they form mounds that imitate the rolling hills of Wisconsin. They accentuate our beautiful topography and add rich oranges and reds to it each fall. In winter, the reddish—maroon fruit clusters atop the coarse twigs add subtle color and texture to the drab winter landscape.

Sumacs are incredible! They are Good! They can be Bad! But in some way, they are all Beautiful!