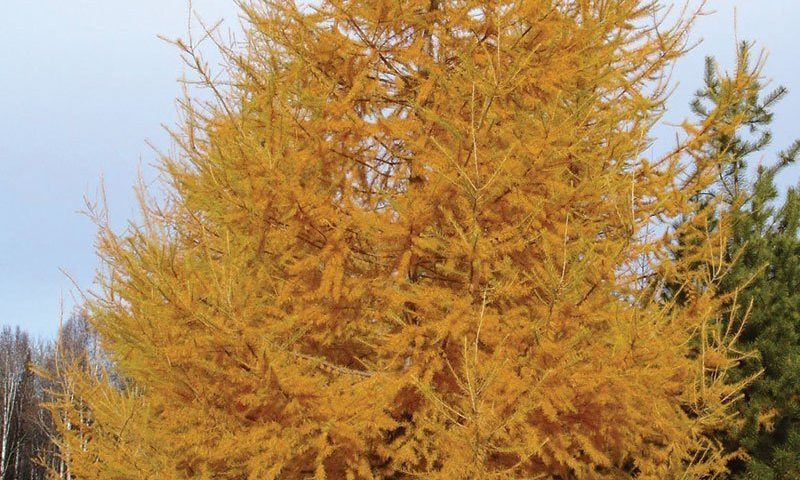 Tamarack is a Wisconsin native deciduous conifer. Unlike most evergreens and conifers, the Tamarack tree loses its needles each winter season. It possesses a narrow, open conical form with horizontal branching and drooping secondary branchlets. The soft, bright blue-green foliage turns a rich golden-yellow in fall. A great choice for wet sites! May also be known as Eastern Larch, American Larch, Hackmatack.

Tamarack grows quickly on well-drained upland sites but will still perform in less than ideal soils. Use it as a specimen plant or to provide light shade. Its deciduous nature and fine texture is well suited to spaces where winter sun is desired, such as a south facing window.

White Throated Sparrow, Song Sparrow, Veery, Common Yellowthroat, and Nashville Warbler all benefit from Tamarack trees, whether for food or cover. Lowland Tamarack stands are habitat to Ospreys and the Great Gray Owl farther north. Spruce Grouse and White Winged Crossbill use Tamarack as a food source in winter. During the growing season, keep an eye out for the native Columbia Silkmoth larvae.

Although adaptable, Tamarack is not tolerant of prolonged drought due to its shallow, spreading root system. A consistent mulch ring around the base will help retain moisture, and the tree should be watered when less than one inch of rain is received per week.

The crown can be raised if desired. For the best results, only prune your Tamarack during the dormant season.

Larch Sawfly and Larch Casebearer are the two main insect pests of the species. These can defoliate a tree and reduce vigor, although they won’t usually cause mortality unless there is a heavy infestation.

In trees with reduced vigor, Armillaria Root Rot can further injure Tamaracks. This disease is best avoided by keeping the tree healthy with enough moisture and mulch.

Since it’s deciduous, it can tolerate salt spray from roadways. However, Tamaracks are intolerant of urban pollution and excessive heat, making it unsuitable for use along roadways with heavy traffic or in areas with extensive pavement.

The American Larch has one of the widest ranges of North American conifers. This extensive spread also gives the tree significant genetic variability. Our Tamaracks are grown from the seeds of local trees, making them adapted to Wisconsin climates.

Tamaracks growth rate is highly dependent on its site. In swamps and bogs, a six foot tall tree may be over 50 years old! However, on well-drained sites the tree will grow quickly as long as it has full sun. While Tamarack is often thought of as a swamp or bog tree, it does not tolerate sustained flooding. It also struggles with competing plants and will often be replaced by Black Spruce in bog environments.

A mature Tamarack tree can produce over 20,000 cones in a good year, releasing up to 300,000 seeds! The cones will persist on the tree for two to five years and are extremely attractive in winter when the needles have dropped.

In Algonquin, the name means ‘wood for snow shoes’ since its wood is flexible in strips. The roots were used for sewing and the inner bark was a treatment for wounds and frostbite. The wood of Tamarack is valued for its decay resistance and is used for fence posts and railroad ties.

The foliage of Tamarack provides light shade to plants beneath, so choose companions that can tolerate partial shade. Native options include Redosier Dogwood, Labrador Tea, Sedges, and False Solomon’s Seal.