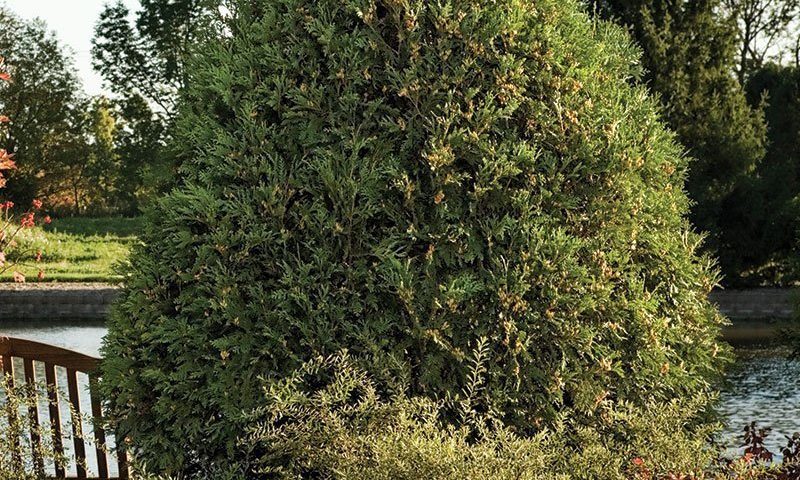 A Johnson’s Nursery origination; J.N. Plant Selections introduction, the lush, dark green foliage of Technito® Arborvitae makes it ideal for a screening hedge, especially where space is limited. It also requires no shearing to maintain the shape and holds up quite well under heavy snow.

The Technito® Arborvitae is an excellent choice for green screen and windbreaks where a taller plant is not desired. It also works well for smaller spaces and as a low maintenance hedge.

Left: Technito® Arborvitae can be sheared to a globe form with minimal effort. | Right: A 26-year old Techny next to a Technito®, the same age.

The dense habit and branching of the Technito® Arborvitae provides good cover and excellent nesting habitat for native bird species. The Pine Siskin will consume the seeds in the Technito’s small cones during the winter months.

Technito® Arborvitae’s dense, full habit eliminates the need to shear the plant. Let it grow naturally. Heavy snow loads may be removed with a broom over winter. Water well going into fall for best results. Fertilizer formulated for evergreens, like Holly Tone, can be applied in spring.

The Technito® Arborvitae is an excellent choice for screening and windbreaks where a taller plant is not desired.

Like its Techny parentage, the Technito® Arborvitae has no serious disease or insect problems. It is resistant to winter burn and snow loads, meaning there is no need to cover them during the cold months. As with all Thuja occidentalis varieties, Technito® Arborvitae is palatable to deer and may require spraying with Bobbex to deter animal browsing.

Seasonal needle drop is a naturally occurring process in all evergreens and should not be mistaken for insect or disease. Interior browning and shedding of the needles occurs each fall as the tree sheds its old foliage in preparation for new growth in spring.

Technito® Arborvitae was actually born from a mistake. Back in 1984 our production department purchased Techny Arborvitae liners- baby trees that are planted in the fields of our Jackson farm- from Bailey’s Nursery in Minnesota. Techny Arborvitae is a popular variety for screening but gets quite large. In 1989 Mike Yanny (Johnson’s Nursery Senior Horticulturist and owner of JN Plant Selections), noticed there was one arborvitae in the block that was much denser and smaller than its neighbors. So like any good propagator would do, he took cuttings of this rogue tree and planted them in another location to observe. As the trees grew, Mike noted their thick dark green foliage was resistant to winter burn and their growth rate was less than two-thirds the speed of Techny, making it ideal for smaller yards. Turns out, Mike had discovered a “sport” in that original group. A sport is when a bud from a parent plant (like the Techny) has a mutation that changes its structure (like the Technito®). Many new varieties of plants are discovered this way. After many years of observation, in 2004 Technito® Arborvitae was co-introduced with Baileys Nursery (since the original plant came from their stock). It has quickly become popular among landscape professionals and homeowners throughout the country.

The dense habit and branching of the Technito® Arborvitae provides good cover and excellent nesting habitat for native bird species.

Technito® Arborvitae stands well on its own as a green screen plant, but perennials can be mixed at the bed border for added color. Options depend on the amount of sunlight the plants will receive. Be sure to leave room for the Technito’s mature size. Alternatively, Technito® can be mixed with other small evergreens of different texture, like the Waterer Scots Pine or the Mucronata Spruce, for a varied screen.