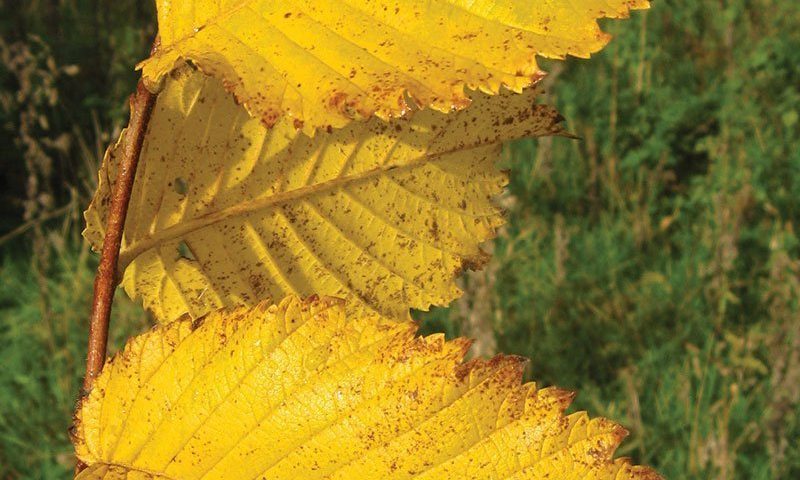 Valley Forge Elm’s wild habit in youth but graceful stature with age make it an ideal candidate for large spaces. It is especially well-suited for boulevards and parkways away from buildings, or in other open areas where it has room to grow. Valley Forge Elm, and elms in general, is susceptible to Verticillium Wilt and should not be planted where a previous tree was lost to the disease.

The branch crotches of Valley Forge Elm provide habitat for many migrant bird species. The tree also hosts a plethora of insects that no doubt provide a buffet for insectivores. When seeds are produced, Valley Forge Elm will provide food for birds and small mammals.

As an American Elm cultivar, Valley Forge Elm can serve as a larval host to the Eastern Comma, Mourning Cloak, Question Mark, and Painted Lady butterflies. And if you’re lucky, you may spot the massive Columbia Silkmoth caterpillar in Northern Wisconsin.

Dutch Elm Disease is spread by three species of bark beetle in the United States (two in Wisconsin). When trees are damaged, they release compounds that signal other trees to prepare for the same sort of injury. However, these bark beetles have also evolved to “sniff out” these injured trees and attack them, bringing Dutch Elm Disease along for the ride.

For this reason, Valley Forge Elm (and all other elms) should be pruned only during the dormant season when the beetles are inactive and the trees are not releasing the warning signal compounds. The only time that pruning during the active season should be accepted is when there is significant risk posed by the branch to be pruned. A certified arborist will be able to provide more information for your situation if necessary. To find one, visit the Wisconsin Arborist Association Arborist for Hire page to locate one near you.

While Elms are tough trees- and Valley Forge Elm is no exception- you should avoid stressing them as much as possible. Watering during periods of drought, using a large mulch ring of 2-2.5 inches in depth, and avoiding other insect damage during the growing season will reduce the chances of your Valley Forge Elm developing Dutch Elm Disease.

If you are concerned that your Valley Forge Elm may have developed Dutch Elm Disease, contact your local arborist to assess your tree and develop a plant health care program. Treatment for this disease is technical and requires products not available to the homeowner.

Young, thin-barked trees should be protected during the winter months from buck rub with a vinyl tree guard or similar product. Trunk damage will reduce tree vigor, cause canopy dieback, and will open the tree to future infection by other diseases.

No Elm cultivar is completely immune to Dutch Elm Disease, and even highly resistant cultivars like Valley Forge Elm can fall victim to the fungus when stressed. Watering during drought, mulching, and avoiding mechanical damage (including pruning) during the growing season will help reduce the chance of the tree developing Dutch Elm Disease.

Valley Forge Elm has excellent resistance to Dutch Elm Disease but is susceptible to other diseases and insects when stressed. You can greatly reduce your chances of acquiring these diseases by keeping your tree healthy and vigorous. They include:

Valley Forge Elm was developed by Agricultural Research Service in Maryland and released by the U.S. National Arboretum in 1995. This cultivar is the most resistant to Dutch Elm Disease of all American Elm selections. It also is quite resistant to Elm Leaf Beetle, which can be problematic on other cultivars. Valley Forge Elm has a typical elm shape, with multiple upright leaders cascading outward with age.

However, the tree is not without its flaws and young trees could be considered irregular or floppy. In Erik’s experience, “It’s easy to tell the difference between Valley Forge Elm and other cultivars, especially Princeton Elm, in our fields. Where Princeton is distinctly upright in branching with a mostly straight leader, Valley Forge has a greater tendency to sweep back and forth, with lateral branches being more horizontal. The laterals tend to weep downward, which looks beautiful on an established tree but not so much on a 2-inch caliper plant in the fields. However, you can’t argue with its disease and pest resistance.”

Valley Forge Elm is a rapid grower, which can be considered a double-edged sword depending on your objectives. On the one hand, you will not have to wait long for the tree to provide shade and water interception. On the other hand, Valley Forge Elm does have a greater pruning requirement than other moderately-growing shade trees, especially when young. The trees have been known to develop a more manageable habit with age, but you should manage your expectations when the tree is young.

The leaves of American Elm and its cultivars decay rapidly when compared to other hardwoods like Oaks, Maples, and Hickory. They are also high in nutrient content. For these reasons and its rapid growth, American Elm is useful as a soil-building plant where soils are depleted or generally poor.

American Elm and its cultivars are generally self-sterile. While individual trees can produce fruit, they are rarely viable. If fruit production is a concern, plant American Elm cultivars like Valley Forge Elm individually to avoid cross pollination.

The wood of American Elm and its cultivars has interlocking grains. This makes it tolerant of flexing and bending while retaining strength, but also makes splitting firewood from American Elm either horrendously difficult or a great workout- depending on your perspective. Elm wood is used for hockey sticks, furniture, and flooring, and was used to make food storage crates due to its odorless nature.

The typical elm shape of Valley Forge Elm makes a statement all on its own. Take care to not plant other medium-to-large stature trees too close to Valley Forge Elm, as it will likely outcompete other trees and shade them with age. Understory selections should consist of shade-tolerant plants like American Hazelnut, Jewel Bushhoneysuckle, and American Elderberry.