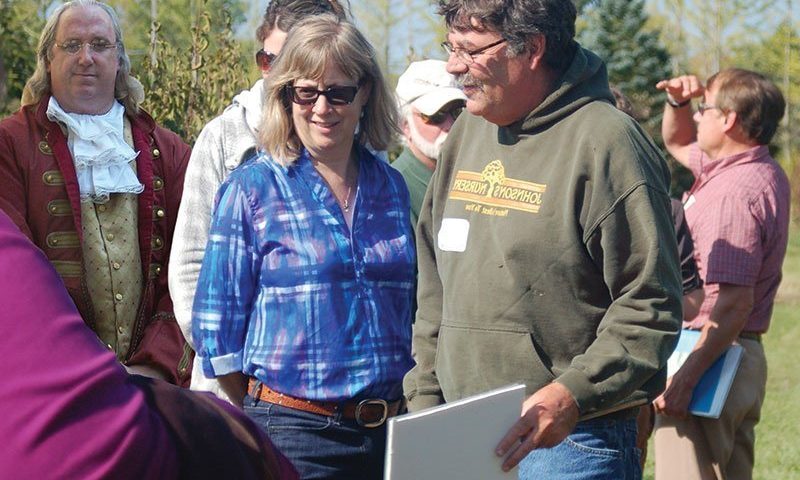 In September 2014, Johnson’s Nursery and SEWISC (Southeast Wisconsin Invasive Species Consortium) hosted the second meeting of Where Ecology Meets Economy—A Forum for Green Industry and Land Management Professionals. It was the second educational get-together between the Green Industry and the Conservation communities in the past two years. The two groups are not totally exclusive of each other. They are far from it and seem to be more and more of a mixture each year. I love it!

There were arborists and municipal foresters who attended. Nature Center educators and nature center managers. We had people that control invasive plants in natural areas as well as people who manage weeds in nurseries. There were professional growers mingling with professional ecologists. We had growers with an ecological concern and ecologists with an interest in economics. Numerous landscape architects and designers attended, some that do exclusively native plant restoration work but most that do a mixture of both restoration and traditional landscaping. I sensed all of them had a thirst for knowledge and a deep concern for our environment. There were garden center operators and landscape contractors in attendance with their eyes wide open, just like all of us. The people who wrote and enforce the invasive species regulations in our state were there. So were several the businesses that are regulated. I saw some of them talking to each other. That was cool! People were there that I didn’t know but I think knew me. Now I know them. There was a lot of interaction at this meeting and it was between a lot of people who have not traditionally interacted very much. That is what this meeting was all about.

Let me tell you some of the other highlights.

Neil Diboll from Prairie Nursery led off the educational sessions with a presentation entitled, Cultivating Nature in Our Landscapes. He had no slides and yet his intriguing stories about the evolution of his company from a ‘weed farm’ to a viable native plant nursery were more vivid than any picture could capture. My favorite line was “Bowling saved my life,” when Neil referred to his struggles of working almost constantly for several years and his only respite from it all was bowling once a week. He talked about the changing economy and how many people are now more interested in quality of life products now than ever before. He thinks that native landscapes are going to become increasingly attractive to people in the future because they require fewer inputs and are therefore less costly. They bring loads of wildlife to one’s yard and in simple terms bring a higher quality of life to many people.

Kurt Dreisilker, the Manager of Natural Recourses for the Morton Arboretum, presented Case Studies on Plant Invasions from a Public Garden. This was a fascinating presentation to me because it is a microcosm of what is going on throughout our country with managing invasive species. Kurt touched on some of the history of The Morton Arboretum, one of the most well respected horticultural institutions in the world. They have a fabulous collection of woody plants planted in close proximity to natural areas on the arboretums grounds. Kurt told us how numerous plants from their collections have invaded the natural areas and had to be controlled. Determinations are made about the value of each plant accession that was escaping versus the destruction being caused by the escapee. The arboretum formed a committee to look at the possible harmful species on a case by case basis to determine whether they should be de-accessioned and removed from the grounds. In addition, they formed watch lists of plants that may be starting to invade their natural areas and should be considered for future de-accessioning. I think it would be interesting to sit in one of those committee meetings and be a party to those discussions.

Kelly Schultz, the Nursery Coordinator—Native Seed Nursery of Lake County Forest Preserve District in Illinois gave a detailed report in her presentation, What is Local Genotype? A Complicated Question with Significant Consequences. She gave loads of excellent information about genotype and its significance for successful ecological restorations. Kelly explained how factors such as soil type and flowering time can cause problems for plant success if the proper ecotype is not used. She talked about both inbreeding depression and outbreeding depression being sources of concern when doing restorations. Either can weaken the gene pool to an extent that can threaten the local population. Kelly talked about the ability of wind pollinated species to cross pollinate over a much broader range than insect pollinated species and how this is a factor in determining how far a restorationist should go to acquire appropriate seed of a particular species. This was an outstanding presentation and made me want to know what other gems of information this lady knows that could help me in my business.

Michael Yanny, yours truly, was the last speaker of the morning, and gave one of the worst presentations you could imagine!!! NO! Not really, I’m just uncomfortable summarizing my own presentation. I think I did OK. There were no tomatoes thrown! Anyway, I talked about Obtaining Project Appropriate Plant Materials for Landscaping. I covered some of the same ground as the previous speaker, Kelly, but from a woody plant perspective, which can be somewhat different. Certainly, extending the range from North to South in ecotype, in my opinion, is less appropriate for woody materials than it is for herbaceous plants. Lignification processes (stem tissue becoming woody) are triggered by day length in most situations and don’t allow for quick adaptation as you move more Southerly genotypes to the North. I talked about the various types of landscaping other than pure restoration and how native plant materials can be utilized in almost all forms of landscaping to a certain extent. An explanation of Nativars illustrated how these improved plants can be useful for landscaping in an environmentally considerate way. Of course, I read a poem, Eclectricity, which seemed to get some laughs, especially when I morphed into Ben Franklin while at a mythological public hearing on noxious weeds and declared the founding of eclectricity. It was pure fantasy with a bit of truth—maybe even a lot of truth—at least I think so. You can find the audio stream from my reading at the end of this article.

In the afternoon we had a panel discussion with everybody who presented, and added John Gall, Special Projects Coordinator from Wachtel Tree Science and Tom Buechel, Head of Production at McKay Nursery. Much of the session dealt with availability of native materials in the trade and how to get more of the material into commerce. There was a discussion about how to get the big chain garden centers to participate in our meeting. I thought one of the more profound discussions involved Neil Diboll talking about how education was the key to changing landscaping behaviors, and economics will have a huge influence over determining what decisions we make in regards to improving our environment.

Following the panel discussion, various tours were given by Johnson’s Nursery staff. Plant production and development along with native plant materials were shown and processes explained. It allowed everyone to get an inside look at a production nursery and learn from its staff in the field.

Johnson’s Nursery, Inc. and SEWISC (Southeastern Wisconsin Invasive Species Consortium) co-hosted the event and could not have done it without the support of 27 sponsors and the 132 people who attended. We hope to have another event next year and hope you can attend.

Below is the audio stream and text of the poem I presented. Enjoy!