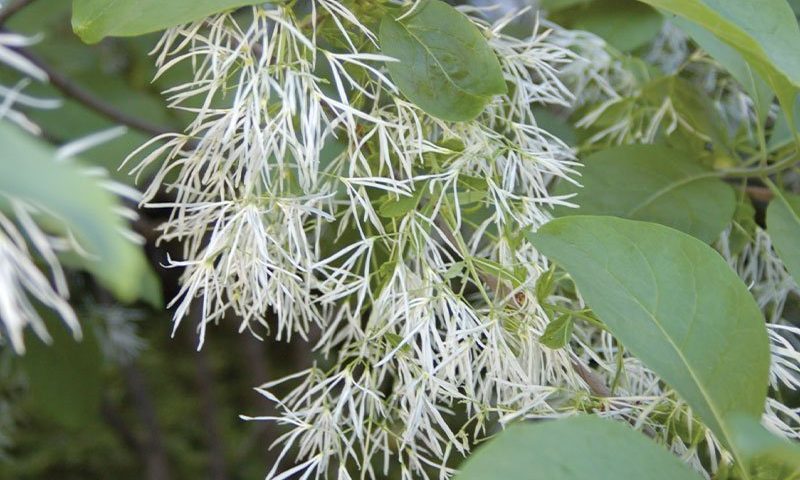 The White Fringetree is recognized by the British as one of the finest American plants introduced to our gardens. Rightly so! In late spring, the White Fringetree offers some of the most delicate, feathery clouds of fleecy white blooms. The flowers also provide an enticing subtle scent that begs garden visitors to get up close (hence the alternative name Sweetheart tree). This unique specimen can be viewed as both a large shrub and a small ornamental tree due to its spreading habit. You may also know White Fringetree as American Fringetree, Grancy Gray-beard, Old-man’s-beard, and Sweetheart Tree.

The White Fringetree is native to the savannas and lowlands of Southern New Jersey to Florida, and west to Oklahoma and Texas but the U.S. Department of Agriculture deemed its hardiness as zone 3-9, which allows it to be planted throughout the majority of the U.S. The versatility between being an ornamental tree or a large shrub makes the White Fringetree excellent for planting both as a stand-alone specimen or allows it to be massed in groups. Anywhere a small tree may be needed, such as small yards, near a patio, under power lines would be an excellent place to plant this species.

Planting in a location with full sun exposure will result in prolific blooming but the leaves fare better in partial shade. The ideal compromise would be full sun exposure throughout most of the day with shade for the hot late afternoon hours.

They thrive in slightly acidic soil that is well-drained, though they are considerably tolerant of most soil conditions as well as air pollution, deeming them urban approved. Avoid planting too close to salted roads.

During its early spring bloom, bees are widely reported to pollinate the blooms of the Fringetree. This species is dioecious, meaning a male and female plant is required for pollination and fruit production. Female trees form berries that are used by many different types of wildlife and are particularly loved by robins, blue jays, cardinals, mockingbirds, waxwings, wild turkeys, and thrushes.

They are rarely labeled as male or female and it’s impossible to know which you are getting without fruit present which forms in late summer. A particular tree without fruit doesn’t always guarantee it’s a male; it could mean that the female was not pollinated and therefore was unable to produce fruit that season. Thankfully, both male and female White Fringetrees are equally beautiful and flower regardless of having a companion of the opposite sex.

The White Fringetree is adaptable to a plethora of soil types that typically cause problems for many other plants, including clay or sandy soil texture. Plant in slightly acidic soil for best results, although a little alkalinity will also work. Make sure to follow a regular watering schedule during the first growing season to establish a deep, extensive root system. Watering may be reduced once established, but avoid planting in overall dry conditions, the stress could lead to Botryosphaeria dieback.

We recommend feeding with a general-purpose fertilizer before new growth begins in spring for the first few seasons, or until it appears to be established.

Keep in mind that leaves are late to push out and typically begin forming in mid-May. Its sturdy branches rarely need pruning, and they can be trained to be a single stem specimen if desired. Prune right after flowers fade in late summer.

There are few/no diseases that prove fatal to Fringetree on their own, but in combination, they can significantly reduce vigor and health. Occasionally scale and borer have been reported, as well as leaf spots, powdery mildew, and canker. In southeastern states, it’s a larval host for the Rustic Sphinx (Manduca rustica), Waved Sphinx (Ceratomia undulosa), and Laurel Sphinx (Sphinx kalmiae) but these moths are only native to the White Fringetree’s native range; you won’t find one up here in Wisconsin.

The White Fringetree is in the family Oleaceae, the same family as the ash species, and was reported as the secondary host of the Emerald Ash Borer (EAB). However, researchers at Wright State University have found that White Fringetrees in low-density ornamental landscapes were not a significant reservoir for EAB. To further support this observation, a study conducted from 2015-2018 published in Environmental Entomology found that White Fringetrees are likely to withstand attacks by emerald ash borer. The majority of the White Fringetrees analyzed did not become infested. For the ones that did, the majority survived. Scale can be controlled with horticultural oil sprays. As mentioned in Maintenance and Care, planting in dry conditions can lead to Botryosphaeria dieback.

In 1786 from his residence in France, Thomas Jefferson requested seeds from Philadelphia botanist John Bartram, Jr. of the White Fringetree to share with his colleagues.

Nomenclature: The name of the White Fringetree was originally recorded by Carl Linnaeus, a Swedish botanist, also known as the ‘Father of Taxonomy’. When we break down the meaning of the botanical name Chionanthus virginicus we have “chio” meaning snow, “anthus” meaning flower, “virginicus” meaning the state of Virginia. In 1753, when the species was named, Virginia not only included the current state of Virginia, but also Kentucky, Indiana, Illinois, and certain portions of Ohio and Western Pennsylvania.