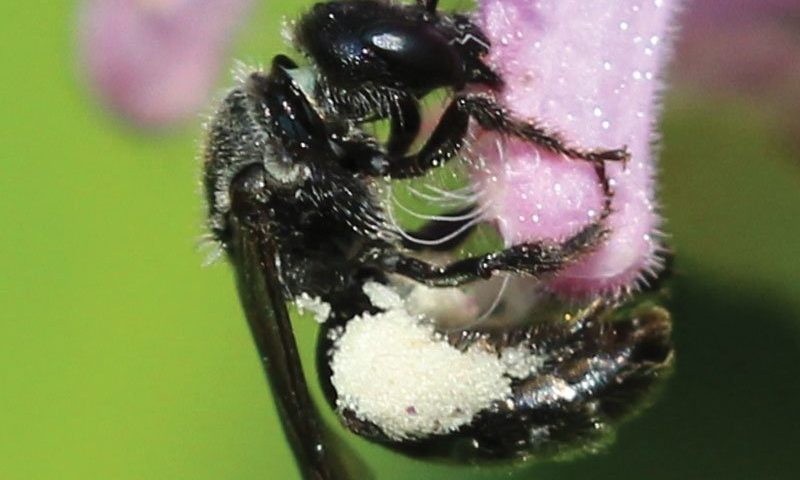 June through August, Wild Bergamot (aka Wisconsin’s native bee balm) is covered with lavender-pink flowers that attract butterflies and bees alike. One bee in particular, is very fond of this minty plant, Dufourea monardae. The Dufourea monardae prefers the nectar of our native Bergamot, as the name suggests, though can also be found on Anise Hyssop. The tiny bee is a kind of “sweat bee” (which are attracted to perspiration, but rarely sting), with a long tongue capable of reaching into the tubular flowers. Ruby-throated Hummingbirds can also be seen visiting the flowers and the caterpillar of the Hermit Sphinx moth (Lintneria emeritus) feeds on the leaves. Being of the mint family, most mammals, like pesky deer and rabbits, have no interest in eating the plants, so it’s a great addition to the yard if you are battling with Bambi and Thumper for territory. On the other hand, Wild Bergamot is incredibly prolific, able to spread by seed or roots, and will greedily take over a garden. If planted too tightly, with poor air circulation, powdery mildew fungus can also be a problem. Unlike other species of Monarda, Wild Bergamot can easily handle drought conditions.

Wild Bergamot was widely used by Native Americans for medicinal and culinary purposes. Chewing leaves and shoving them up your nose could relieve a headache (or you could boil the leaves and inhale the fumes if you are less adventurous). Tea from the leaves and blossoms alleviated cold symptoms and settled upset stomachs. Boiled leaves, wrapped in a soft cloth, was a remedy for sore eyes. Europeans settling in America discovered that Monarda fistulosa tea tastes very similar to the European favorite, Earl Gray tea. Bergamot is also a variety of orange (Citrus bergamia) grown in Italy and France, the oil of which is added to black tea leaves to give Earl Gray tea its distinct flavor. The Earl Gray tea blend was named after Charles Gray, British Prime Minister in the 1830s, who helped pass reforms to abolish slavery in Great Britain. To drink Earl Gray tea is considered very posh, and part of traditional afternoon tea service. However, during the latter part of the 19th century in England, Earl Gray tea was mixed with gin for cocktails and contributed to a rise in alcoholism, especially among females.