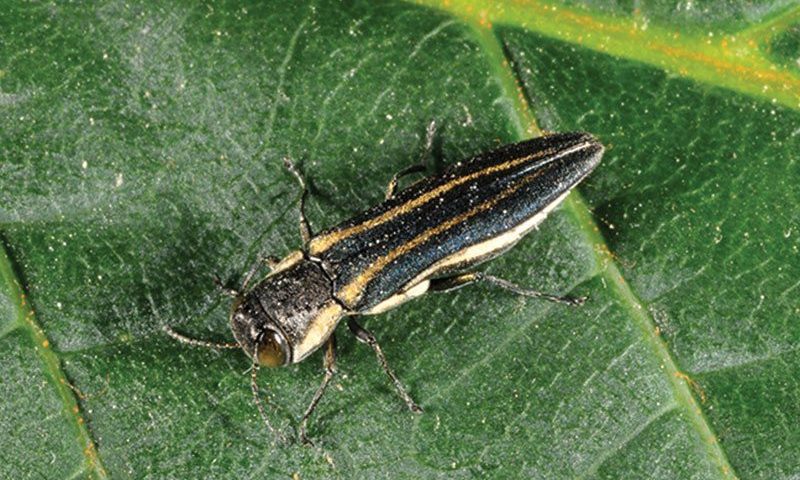 “The most important insect cause of oak mortality is the two-lined chestnut borer (Agrilus bilineatus).” This statement by Phil Pellitteri, a former professor at the University of Wisconsin-Madison, is one all who plant native oaks in Wisconsin should be aware of. These oak pests are common in most of the state and attacks stressed trees, including newly transplanted individuals. Oak death following transplanting of B&B plants is not uncommon in the industry, especially if the root systems have not been cultured properly (made more compact and fibrous). However, from what I have seen over the years, the most serious problem with transplanting B&B oaks are attacks by the Two-lined Chestnut borer during the first two years after transplanting. Symptoms include: tiny little exit holes in the trunks of the trees with die-back on the portions of the tree above the holes. Typically the trees are so disfigured they must be removed.

The most important insect cause of oak mortality is the two-lined chestnut borer (Agrilus bilineatus).

I recommend treating B&B oaks for the first two years after planting with a pesticide containing imidacloprid as the active ingredient. In addition, make sure the trees are mulched and watered regularly to get fast establishment. The quicker they get established the quicker the two-lined chestnut borer will find them unattractive. Once they are established, treatments are no longer needed and they are on their way to becoming beautiful trees.

It should be noted that container trees do not need the insecticide treatment because they have not undergone the root severing that occurs with a B&B tree. However, one must be on the ball with the watering for the first month or so after planting a potted Oak.

Oak Wilt is a disease that everyone that should be aware of. It is a major killer of Oaks in Wisconsin and its neighboring states.

Oak Wilt is a disease that everyone that should be aware of. It is a major killer of Oaks in Wisconsin and its neighboring states. It affects primarily trees in the Red Oak group, which includes: Q. rubra, Q. ellipsoidalis, and Q. velutina. It may infect members of the White Oak group as well but not nearly as much. The disease, Ceratocystis fagcearum, is a fungus that grows in the vascular system (blood stream) of the oak trees and plugs up the passage ways for the water to get to the leaves. That is why the plants wilt first and then die. When plants die, mats of the fungus develop under the bark of the newly killed trees which give off a sweet odor that attracts sap feeding beetles. These insects feed on the mats and then move to living trees that have fresh wounds and spread the disease by feeding on them too. Another way for spread is by root grafts. Because of this, Oak pruning should be minimized in the growing season or should be postponed to the dormant season. When this is not possible pruning paint or wound dressing should be applied to fresh cuts during the growing season on Oaks. This discourages the beetles from feeding. It should be noted that we typically do not recommend the use of pruning paint or wound dressings on newly pruned trees. It slows healing. The use on Oaks in the growing season is an exception.

Tubakia iowensis, Bur Oak Blight is a fungal disease that is relatively new to our area that we should be aware of.

Tubakia iowensis, Bur Oak Blight is a fungal disease that is relatively new to our area that we should be aware of. The blight first appears in June as purple-brown spots on the underside of Bur Oak leaf veins. In July, the spots expand, and purplish necrotic veins become noticeable on the upper leaf surface. Leaf veins are killed as the infection progresses and a characteristic wedge shaped necrotic area develops on the leaf blade. The trees have a scorched appearance with the disease typically worse on the bottom branches and progressing upwards over time. The pathogen overwinters on the diseased leaf petioles. Spores are released from this area in the spring as the new oak leaves are developing and expanding. Quercus macrocarpa. var. oliviformis (a small acorn variety) is the most susceptible to the disease. Highly resistant Bur Oaks have been observed growing right next to heavily infected individuals. So attention should be paid to these superior trees for future cultivar selection.